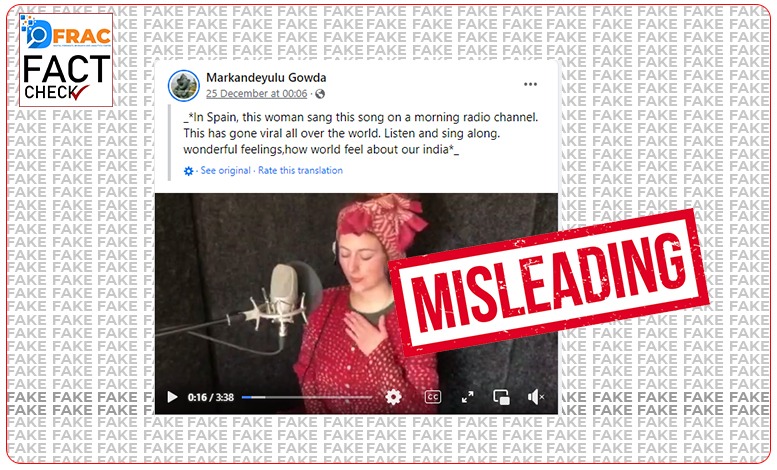 A video is being shared extensively on social media. In which a British woman can be seen reciting a Sanskrit shloka.

Sharing the video, a user claimed that a British woman is reciting a Sanskrit shloka on a Spanish radio channel.

Several users also posted this video on Twitter with a similar claim.

Also Read: “Crime in UP Is Declining” said Amit Shah. Know The Reality

On checking the viral video, our team found a report published on 05 Jan 2019 on Grin News website.

The woman’s name in this report has been given as Gabriella Burnell. Reports say that Gabriella started singing at the age of 16. She used to sing jazz songs with her friends at parties. She also started his own band. After college, she also wrote several songs which she played at gigs across the London. She also composed some music and briefly did stand-up comedy.

According to the report and her Twitter handle, she is not living in Spain but in London.

Apart from this, we also got a tweet from the British High Commission in India. In which the video of Gabriella Burnell was posted. Also said, listen to @gabriellaburnel who promotes Sanskrit, the ancient language of #India and has earned her the nickname ‘India’s Cultural Ambassador to the UK’ – her work shows the importance she gives to Indian culture.

So, it is clear that Gabriella was not reciting Sanskrit shlokas for Burnell’s radio channel. This claim is misleading.