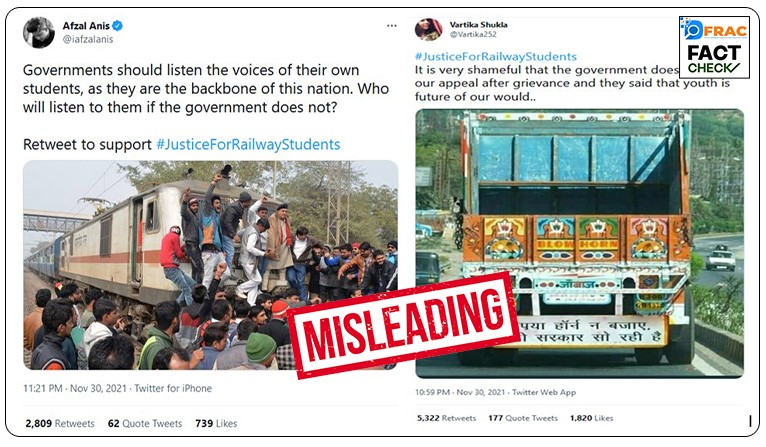 On 1st Dec, 2021, hashtag #JusticeForRailwayStudents is trending at number one on twitter with 3.0M Tweets. Railway aspirants are furious with the government after the board has been halting the exams of Group D, candidates are demanding the Railway Recruitment Board to conduct the exam as soon as possible. To show their outrage against the government, students rooted to Twitter and trended #JusticeForRailwayStudents demanding justice for their hard work.

While some of the Railway aspirants are genuinely showing their anger by using the above hashtag. Along with them, some mischievous accounts are posting old, morphed and unrelated images to mislead common people. Some of the examples are shown below:

A verified twitter account bu the name Afzal Anis has posted an image of students protesting at railway tracks, with the description “Governments should listen the voices of their own students, as they are the backbone of this nation. Who will listen to them if the government does not? Retweet to support #JusticeForRailwayStudents”

This tweet has been retweeted 2.8K times, Quote Tweeted 62 times and liked around 700 times.

On performing simple reverse image search of the image shared by Afzal Anis, it was found it has been taken from a The statesman article of 2018 with the title “Rail Roko hits train services”.

Hence, it can be seen the above image is not even related to the outrage of railway aspirants but it is of the image of ‘Rail Roko’ agitation launched by the Adivasi National Convention Committee (ANCC) at different places in Assam.

Thus, the image used above is misleading.

The above tweet has been retweeted 5.3K times, Quote Tweeted 177 times and liked 1.8K times.

Hence the above image being shared and retweeted many times is morphed.