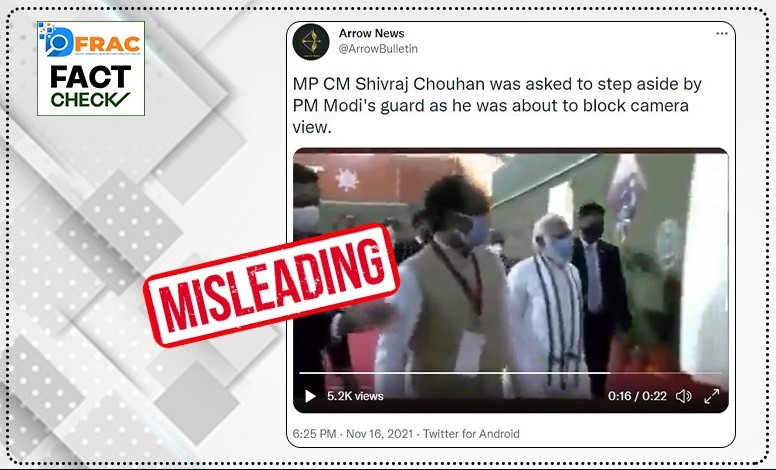 It can be seen in the viral video that Shivraj Singh is seen walking with PM Modi but suddenly he is stopped by someone and Modi continues to walk ahead.

MP CM Shivraj Chouhan was asked to step aside by PM Modi's guard as he was about to block camera view. pic.twitter.com/NUtSE5VHue

The video claimed that Chief Minister Shivraj Singh was stopped for appearing in PM Modi’s frame. Also the officer who stopped him is the staff of the Prime Minister’s Office.

The video was posted on the Facebook page of the Indian National Congress of Madhya Pradesh on November 17, 2021. They also proclaimed – “We condemn this treatment of the Chief Minister”.

However this claim is fake.

In the viral video, it is an officer from the PM’s office who stopped Chief Minister Shivraj Singh but it was Bhopal Collector Avinash Lavania. Giving information, he said that,” “I completely refute the matter that is going viral in the social media that Hon’ble CM Shri Shivraj Singh Chouhan was stopped by the security officer during the visit of Hon’ble Prime Minister Shri Narendra Modi ji.”

He further said, “In reality, an important message related to the program was given by me to Chief Minister Shri Shivraj Singh Chouhan, which he listened to and immediately proceeded forward”.

Apart from this, Chief Minister Shivraj Singh also posted the video related to the program on his official Twitter account and accused Congress of lying.