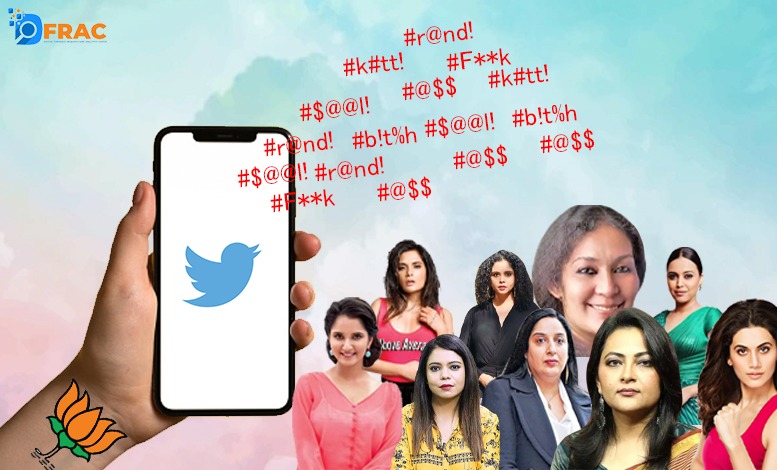 This report shows the hatred for women spread by some Twitter accounts. Some Twitter users are using abusive and derogatory remarks to express anger towards outspoken women.

Some of the examples of the above is shown below:

On checking the replies sent on the tweets to Rana Ayyub, Swara Bhaskar, Sania Mirza, Arfa Khanum Sherwani, Richa Chadha, Taapsee Pannu and many others, it was found that some Twitter users are making derogatory statements against them and even using abusive language.

A Twitter user has thanked Pakistan for taking Sania Mirza and urged Pakistan to take Swara Bhaskar and Rana Ayyub as well. The tweet has garnered 319 retweets and 1712 likes.

Several other users have also  tweeted the same thing.

On analyzing the derogatory content posted by different Twitter handles for Rana Ayyub, Sania Mirza, Arfa Khanum Sherwani, Barkha Dutt, Saba Naqvi, Richa Chadha, Kavita Krishnan, Taapsee Pannu, Swara Bhaskar and Safoora Zargar. It was found that some accounts were posting derogatory remarks towards almost all the women above. Listing some of them below along with their tweets.

Most of the tweets and retweets were pro-BJP and anti-Congress. The replies were being used to make derogatory comments to other users.

This account was created on January 9, 2020. The first reply was to Gauahar Khan and abusive words were used to reply to Vishal Dadlani on the day of account opening.

On further analyzing the profile of Amit Pathak, it was found that there are only 1% tweets, 31% retweets and 68% replies.

The description mentioned on the twitter account of Amit Pathak suggests that he is supporter of BJP.

This account was created on 8th Dec, 2016, with its first anti-Congress reply to Rahul Gandhi using hashtag #CorruptCongress on June 23,2018. On analyzing the profile of Chetan Mislolkar, it was found that 2.6% were tweets, 87.6% were retweets and 9.8% were replies.

The description mentioned on the twitter account of  suggests that he is follower of PM Modi and a Proud Sanghi.

This account was created on 11th sept, 2020. The first tweet he posted was on 18th Sept 2020 and it was a reply to Anurag Kashyap which included abusive words for him. On analyzing its posts further, it was found that this account’s tweet was 8.1%, retweets were 2.7% and replies 89.2%.

This account was created on 26 Sept, 2019. On analyzing posts of this account, it was found that this account has no tweets, only retweets and replies i.e., 59.9% replies and 40.1% retweets.

On analyzing the above twitter accounts, a pattern was visible which shows:

Our team has discussed some of the accounts to explain how hate and abuse against women has become common on social media. But we found many accounts in our research, which are indulging in lousy acts like abusing women and other respected person on social media. It’s hard to understand why Twitter turned a blind eye to accounts publicly abusing people. A short list of abusive accounts is shown below. Report these accounts so we can make social media a better place for women and remove the haters.

Table 7: List of abusive accounts on twitter (Highlighting the common accounts using abusive words for all the women)

The above account in the table also shows the same pattern as specified above, with low follower, reply and retweet percentages far higher than tweets with no profile picture applied to these accounts or a normal applied Some have specifically mentioned BJP in their description, some have mentioned hatred towards Swara Bhaskar, some have mentioned nationalist. But it is interesting to know that most of the accounts have been created recently in 2020 and 2021. The motive behind these fake fanatic accounts could be to defame the government internally and cause embarrassment internationally.

Table 8: Pattern shown by above accounts