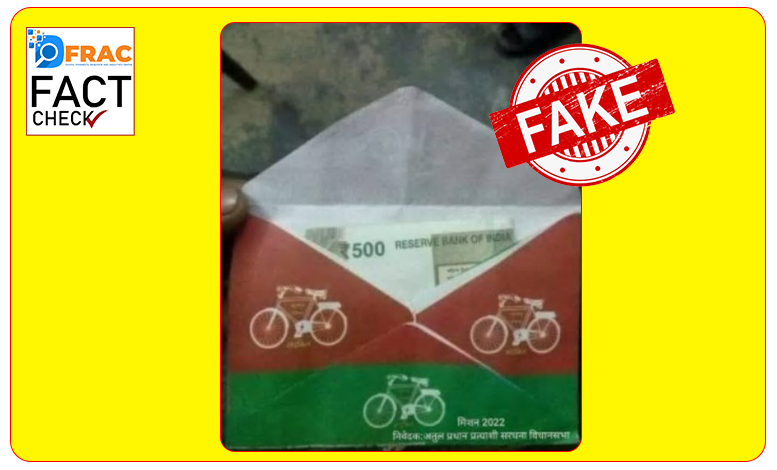 A picture is getting viral on social media platforms. The viral picture is of an envelope with the symbol of Samajwadi Party containing Rs 500 notes. Sharing the picture many users are claiming that SP is distributing money to tempt voters for the upcoming. Along with the picture, Shashi Kumar Social Media Co-Convenor of @BJP4UP wrote, “Samajwadi Vote Buy Scheme”.

Similarly, another user Thakur Vishu Rajput shared the picture with a caption which nearly translates in English, “see how much the Samajwadi Party can fall, don’t sell Hindutva for some money.”

In the same vein, many other users have posted this picture on their social media handles. And, users this time share the image with  “Mission 2020″ and ” the name of SP leader Atul Pradhan” on it.

On our fact check analysis our team found that this post is false and misleading. Further, on reverse searching the mage we found that the viral image is old. 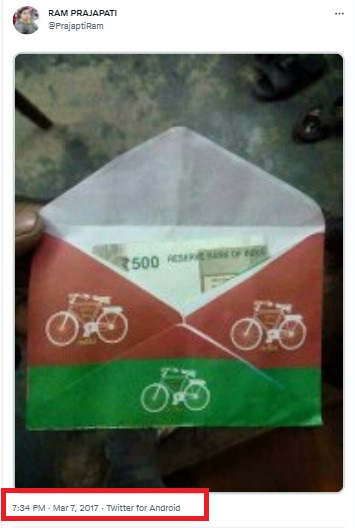 We can see the same image was posted by a user on March 7, 2017.  Above all, in our analysis, we found that this picture is edited. “Mission 2020″ and ” SP leader Atul Pradhan’s name” were added to the real image. This was done to mislead people.

Hence, on our Fact check analysis, we found that the viral picture is fake. Also, it is not related to the 2022 elections.