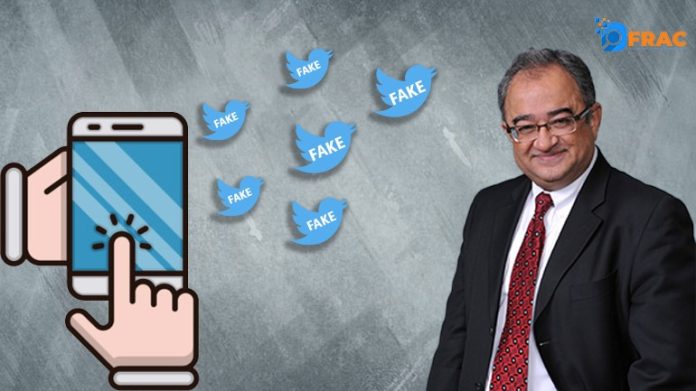 Tarek Fatah is a Pakistani writer and a columnist who is born in Karachi he is a popular figure among the Indian right-wing and is a peddler of fake news that aims to harden negative stereotypes about the Muslim community. His entire Twitter account is filled with the post that is against Indian Muslims. He often spreads fake and misleading news about Indian Muslims to misinform his followers. He is an active user of Twitter with more than 750k followers.

In this DFRAC Exclusive report, we will debunk some of his lies that are spreading misinformation on communal lines, especially on Indian Muslims.

Fake News 1: Shared a Morphed Picture of a Teacher of Madrasa

He shared the picture of a teacher teaching the students of madrassas with the claim that the teacher is teaching the Muslim girls about the comparative superiority of Islam over Hinduism. However later he put down the post.

While doing a fact check on the topic, we found the same image in the report of Outlook with the headline, “This madrasa became the center of modern education, where Arabic, English are taught along with Sanskrit.” (English Translation)

Hence it is clear that the claim by Tarek was fake to misleading his followers by using a morphed picture.

He posted an image from a viral video showing a queue of women and children accepting cash from men and tweeted, “This video from #ShaheenBagh in Delhi speaks for itself.”

Using the reverse image search, we found the image of the viral video was of a relief distribution drive in Old Mustafabad, Delhi.

By looking closely at the video DFRAC found that the flags in the video were actually representative of the ‘Indian Union Muslim League’ and not Pakistan.

Difference between both the Flags

Hence, the claim by Tarek Fateh is misleading as the people in the video were holding flags of Indian Union Muslim League.

Tarek Fatah recently posted a picture of street prayers through his Twitter handle and claimed that Muslims in India blocked traffic for Friday prayers. This is not worship, it is an attempt to scare people.

He wrote in his tweet – Blocking traffic on a highway in India to offer Friday prayers. It does not seem to me to be this prayer; It is a display of numbers to scare others. Any attempt to ask them to go to designated places of worship would be termed as ‘discrimination’.

After spreading the fake news he put down his post. We at DFRAC have debunked this fake claim of his. As the image was of Bangladesh not India. You can read our fact check here.

He tweeted, “Could someone confirm if this video is from the #CAA_NRCProtests at #ShaheenBagh or nor? #DeepakChaurasia.”

He tweeted this for questioning the CAA-NRC and ShaheenBagh Protests.

A user named @Karen_Rebelo debunked his misleading claim. It was clear from his tweet that Tarek misinformed his followers by putting the same video twice with different claims.

He shared a video showing a mob protesting against the release of a film and then eventually demolishing a church and an adjoining school in Pakistan’s Khyber Pakhtunkhwa area.

Under the video he tweeted, “Scenes from Pakistan: Muslim mob attacks a church and school, setting the building on fire and destroying church proper right under the nose of the police.”

On investigating the viral video. It identifies the incident as a demolition of a church and school in Pakistan’s Mardan region. According to reports, on various newspapers like “ The Express Tribune” etc. Muslim protesters set fire on an 82-year-old church, the Sarhadi Lutheran Church and a school in the city of Mardan in northwest Pakistan. The mob was protesting against the film ‘Innocence of Muslims’ that sparked controversy worldwide.
The report was from Sep 2012.

‘Nauroz’ and ‘nevreh’ was perfectly acceptable form of greeting for Kashmiri new year, used by Kashmiris themselves.

Fatah shared a picture of an elderly man wearing a skull cap hurling stone and tweeted the photograph with the message, “Meanwhile #, in India a ‘peaceful’ in action.”

DFRAC reverse searched the image on Google found the image almost three years old We also found the same image posted on January 8, 2016. The Viral image is from the Malda riots.

Fake News 9: Scene of a Movie claimed as a Real Incident.

Fatah tweeted the video claiming that it was a real incident, where a Pakistani mother had slammed the door on the faces of two Polio workers. In the video a woman can be seen behaving rudely with a group of health workers who were on a door-to-door polio vaccine campaign.

The video was a scene from her movie ‘Load Wedding’. The actress of the movie trolled fatah by tweeting, “Thank u for giving ur 2 cents on this but pls first verify the source b4 posting next time. It’s a scene frm my movie”loadwedding”,the polio worker is me & that woman an actress.Through the film we were raising awareness of the issue.Glad 2 see our performances were so convincing.”

In our DFRAC Exclusive we have debunked many of the fake news that were amplified by Tarek Fatah that were hateful against Indian Muslims.It shows his biased narrative against a particular community.He had also shared many deceptive news which have potential to incite communal hatred. Majority of his posts are communal in nature.DFRAC aims at exposing such accounts that push hateful and fake narratives.in the past also we have covered such accounts. Some of accounts are below: