HomeHateNaveen Kumar Jindal and his fake news propaganda on Twitter.

Naveen Kumar Jindal and his fake news propaganda on Twitter. 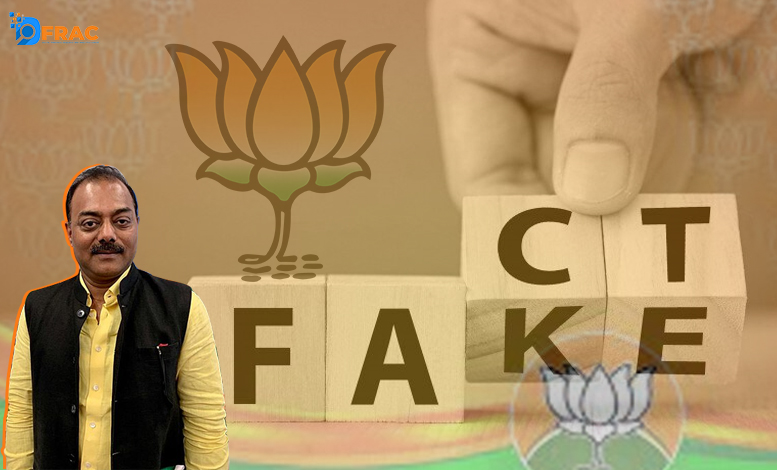 India is a diverse country with many different people with different religions and cultures living here for ages. The beauty of India lies in the fact that it has lived in diversity for centuries and followed the quote “Unity in Diversity.”

From the majority like Hinduism to the minorities like Jainism and Buddhism, diverse cultures and religions have flourished under the same roof. Being the biggest democratic country in the world, all the people of the country enjoy certain powers that make it easy for everyone to live with prestige in the society.

But certainly, there are always some anti-social people in society who only want to move forward by pulling others backward. Today in our report we are going to raid the Twitter account of such a personality named Naveen Kumar Jindal, in actuality, he is a media head for BJP (Bhartiya Janta Party) and spokesperson Rts. He is having more than 100k followers on his official Twitter account. He and most of his followers seem like blind devotees of BJP and Hindutva.

His timeline shows how much active and engaged he stays on Twitter. His account was created in October 2010. Since Aug 2021, he has been very active with his tweets, posting the highest number of tweets, i.e. 37 on 15th Nov 2021.

Below is the graph depicting some verified accounts that follows Naveen Kumar Jindal on Twitter. Some of them includes, @smittal_ips, @Francis_Joseph, @SmrutiPattnaik6, etc. 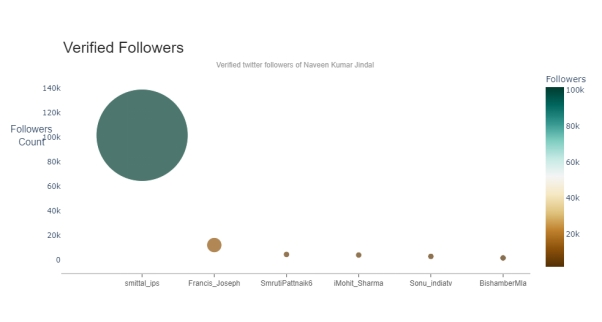 Naveen Kumar Jindal has more than 106k followers on Twitter. Some of the big followers include, @Varun4_, @vaccinebhai, @smittal_ips, @_Real_Priyanka, @kenyadirect, etc. 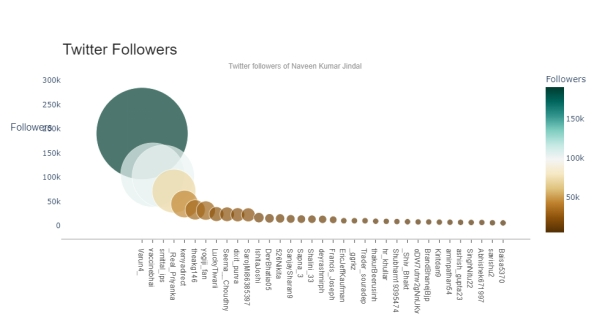 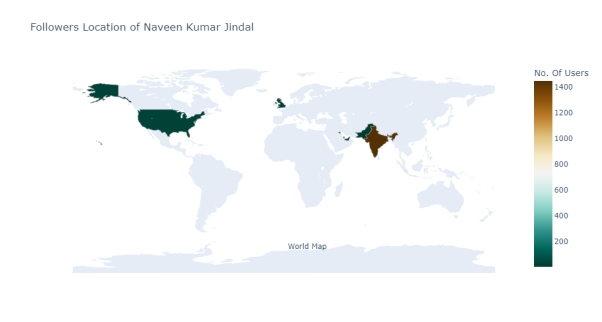 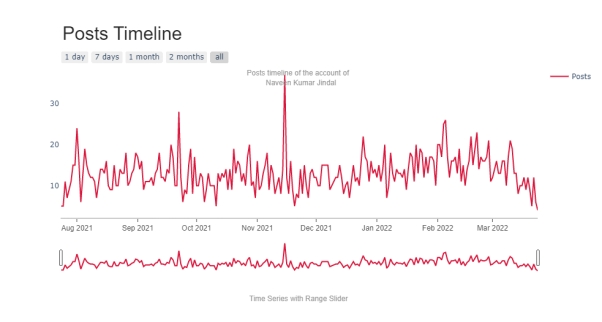 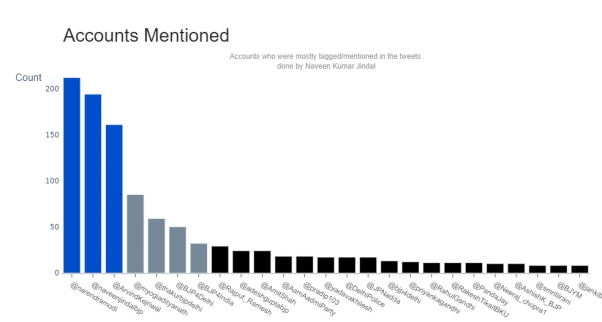 Let us now know how he propagates fake news:

He being a core BJP supporter mostly spreads fake news on his official account with no regrets towards it. He uses his Twitter account to make sure people know the importance of BJP and Hindutva in the country and sideline the rest of the religions. His main agenda lies in making India a Hindu Rashtra.

Let us now talk about the fake news he spreads in detail:

Claim: Gehlot government of Congress got the temple gate of Salasar Balaji Dham demolished by bulldozers at midnight.

Antonio Maino has always had a big problem with the faith of the Hindus. At the behest of “10 Janpath”, the Gehlot government of Congress got the temple gate of Salasar Balaji Dham demolished by bulldozers at midnight. The court of Lord Shri Ram was built above the door. Sinners will also suffer the consequences of this. (Translates Hindi) the caption reads.

We at DFRAC searched the news using certain keywords and google image searches. We found it on The Print and the news stated that the project was under the central government. 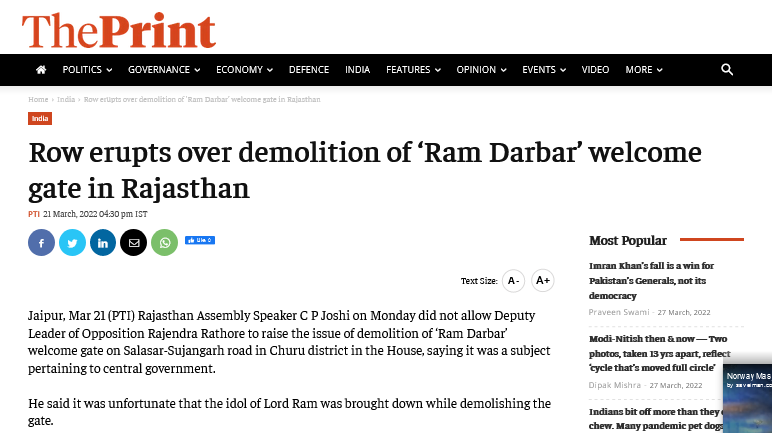 We also found a page on Twitter named @bole_bharat that shared the reality of the video.

The demolition of the temple gate was done by a company under NHAI for a 4 lane project of the Government of India. Rajasthan Congress government has no role in it. The caption reads

Under this, a video was shared with the title that states that the demolition was done by NHAI under BJP’s project.

The demolition of the temple gate was done by company under NHAI for a 4 lane project of Government of India.

Rajasthan Congress government has no role in it pic.twitter.com/gdjCCKwX6Q

Claim: Jindal shared a picture on his Twitter handle under the caption, “zoom out please.”

In the picture, there was a digital scroll that read, “BJP’s win “in India’s biggest state.”and was shared on 22nd march post Uttar Pradesh elections

We at DFRAC found the news fake by reverse image search. The image was basically of the year 17th march 2017 after BJP won the elections in Uttar Pradesh.

Hence the news was of many years ago.

Claim: Jindal shared a video of a drunk police officer. He claimed that this is Punjab has again indulged in drinking after the AAP (Aam Aadmi Party) came into power.

Trends are beginning to emerge in Punjab. (Translates Hindi) the caption reads.

After researching on this video we found this video on YouTube captioned, “Punjab Police in Drunken look.”

This video is as old as the year April 6, 2017. Hence, having no connection with AAP coming in power in 2022 Punjab Elections.

Claim: He shared a picture of ISCKON temple serving food claiming it of Russia-Ukraine crisis.

54 ISKCON temples are feeding the needy people in Ukraine. Sanatan never shied away from the service of humanity. Jai Shree Krishna. (Translates Hindi) the caption reads.

We reverse search the image and found out that the image is old and is from the year 2019. We found the image on the food distribution column of their official site. 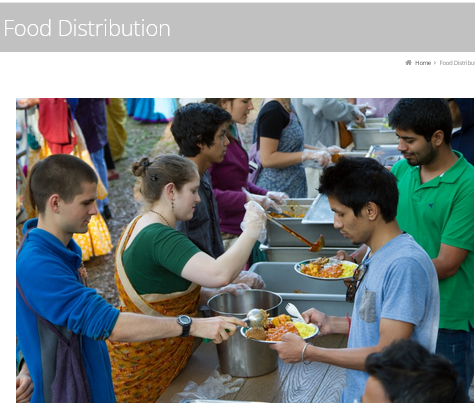 It proved by doing this act that it is a solid hoarder.(Translates Hindi) Reads the caption.

He claimed that Shahrukh spit on lata’s dead body after the prayer.

Looking at the video it is quite clear that Shahrukh was offering prayers for late Lata Ji. And, after that, he just blew air on her mortal remains as a sign of love and respect.

To now the whole incident thoroughly check out this fact check by us.

Not only Jindal spreads the fake and misleading news, but also shares hate through his official twitter account to instigate people of one community over the other. He rather shamelessly criticize the leaders of other parties by giving them mockery nicknames.

Like Rahul Gandhi becomes Pappu, Pappukhan, Kejriwal is kejrudin and sweet Terrorist Akhilesh as Akhileshudin etc. trying to jpoin them with particular section of the people.

Here are the links of certain tweets he did on purpose to humiliate leaders of different parties on social media platforms.

He openly criticise in his tweets the building of a masjid or any other muslim property and encourage the establishment of Ram Mandir or any other hindu property. He through his tweets is setting an example how the mind-set of certain people can destroy the harmony between two communities.

Below is the type of posts that Naveen Jindal does on Twitter. It is seen in pie-chart that in majority he tweets which is more than 85% followed by re-tweets with more than 12.2% and then replies with nearly 2% of his total posts. 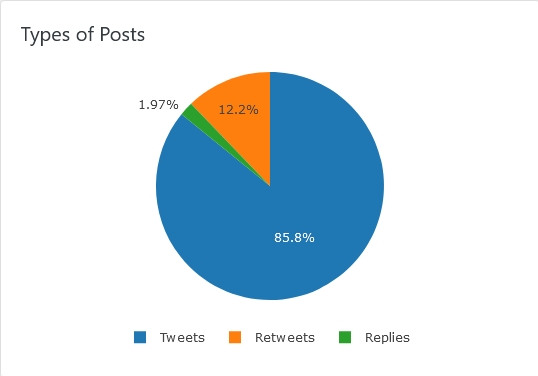 Below is the pie-chart that depicts the proportion in which Naveen Jindal posts photos, videos and gif. It is seen that in majority he posts pictures compared to videos and GIFs, followed by videos. 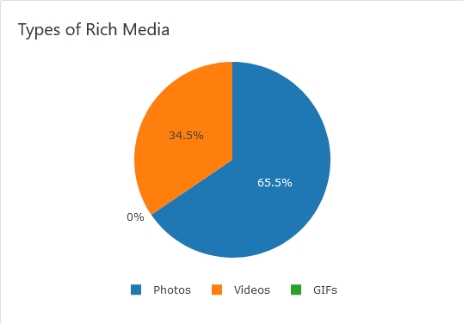 Naveen Jindal has mostly used an IPhone to post on twitter. As it is seen, 3,200 tweets were done through an IPhone.

The wordcloud below shows what were the words that were used the most in the tweets of Naveen Jindal. 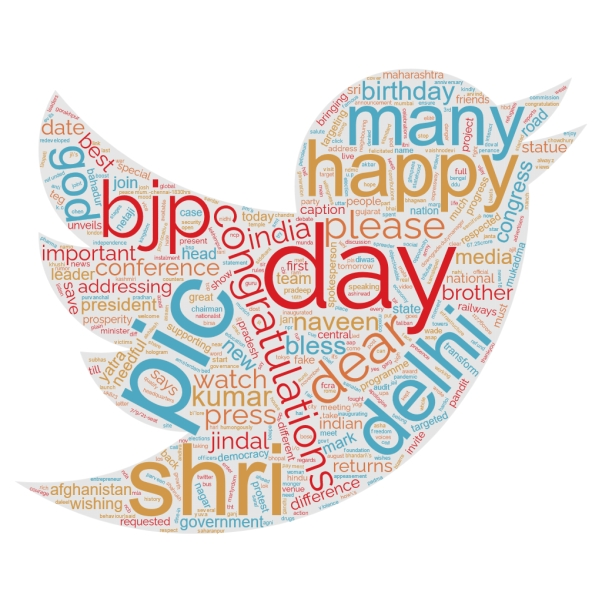 Naveen Kumar Jindal have posted many misinterpreted and misleading photos and videos. The main concern with such news is that they have the potential to develop hate between different communities. Therefore, we must condemn those who try to spread misleading and fake news, also the hate content that can disturb the peace and harmony of our country.

All such posts infringes the main idea of secularism and unity and create an unpleasant environment.