A picture is going viral on the internet. Sharing the picture users are claiming that BSP votes are going to BJP. Along with the post, BSP Youth wrote, “Till now it seemed that the contest is BJP-SP vs BSP. But, now I believe that the contest is #EVM vs BSP. Let’s see #EVM wins that #BSP. But I will always oppose #EVM. BSP won the election with a majority and respected sister Mayawati Ji took over the reins of #UP for the fifth time, wishing you a lot of hearty congratulations at the feet of the Tathagata.

Similarly, many other users have shared this picture with the claims that there is something wrong with the EVM machine and all the votes of BSP are going in the BJP. 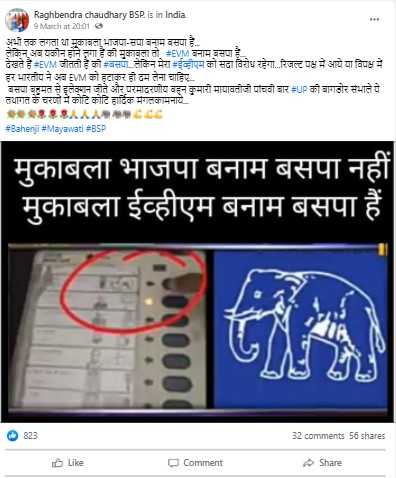 After doing the reverse image, we found that is an old picture. But, some users are circulating this image with misleading claims. We found the same picture on many social media accounts shared in the year 2019. Moreover, the account named Bsp party in Telangana shared the same viral image of the EVM on12th April 2019. 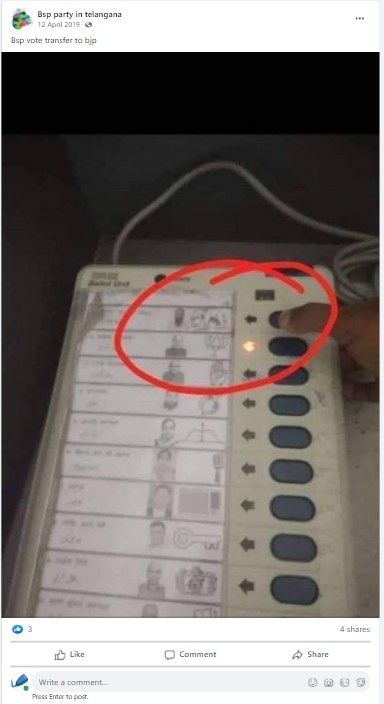 Therefore, this image has no relation with the elections of Uttar Pradesh, in 2022.

Hence, from our Fact check analysis, it is clear that the viral image of the EVM is old. Therefore, the claims made by posting this image are baseless and misleading. There is a plethora of fake news related to the elections. DFRAC warns the readers to rely only on authentic sources of information and not to believe any social media post before proper investigation. Moreover, if any reader has any doubt on any piece of information DFRAC is always there for them to analyze its credibility.