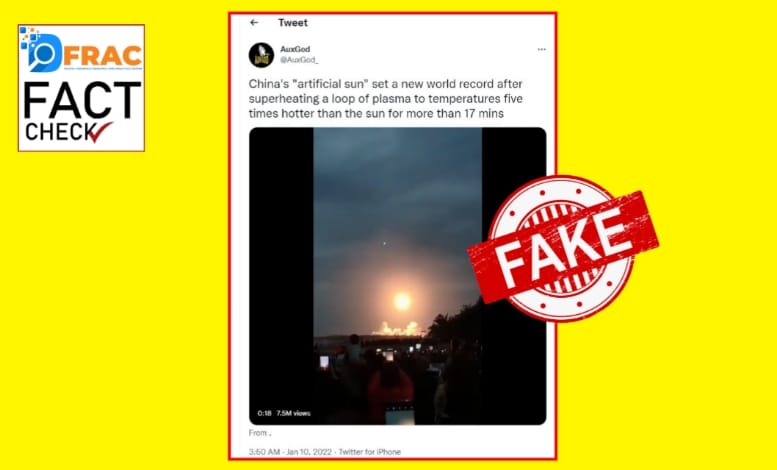 A video is going viral on social media including YouTube, Twitter and other platforms. The video claims that China has launched an artificial sun in space.

What in the dragon ball z is going on… pic.twitter.com/O3LBoPV8IC

China's "artificial sun" set a new world record after superheating a loop of plasma to temperatures five times hotter than the sun for more than 17 minspic.twitter.com/5rd9mCPDKY

The video shows a large fireball going from the ground to the sky. A large number of people are recording this view from their mobile phones.

this is a rocket launch, not an "artificial sun" — what are you talking about?

When our team reverse searched its key frame on Google to check for the above video, many tweets were found regarding the video. A report from a tweet revealed the truth of the video. The video was captured during the launch of a rocket. It was also said that nuclear reactors look like huge steel doughnut-shaped washing machines and while it was leaving a plasma of cloud were made in the sky.

In addition, China’s  Global Times has also denied the claim with a viral tweet. Giving details related to the video, he wrote that people are saying that “the rocket was launched from the land of Putonghua.”. But domestic news outlet CN reported late on Tuesday that the video was probably recorded during the launch of China’s Long March-7A at the Wenchang Launch Centre in South China’s Hainan Province on December 23, 2021.

China’s claim to launch the artificial sun is also true. We get to know about this from a report by the Independent. In which full information has been given in this regard.

Hence, the claim made with viral video is fake and misleading.