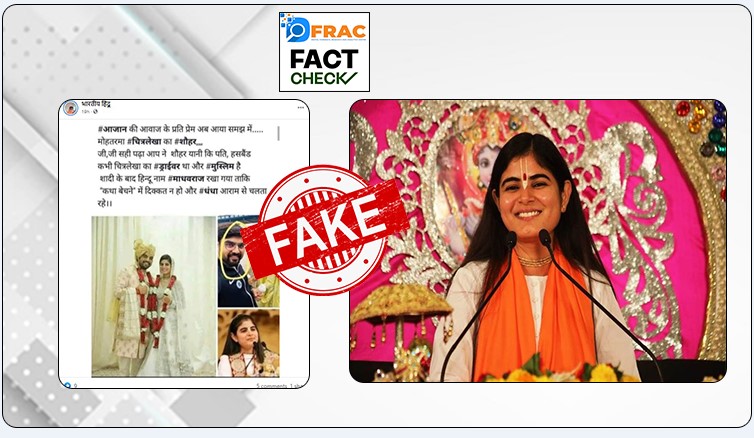 Some pictures of Haryana’s storyteller Devi Chitralekha are being shared on social media with the claim that she is married to a Muslim man who was once her driver. It was also claimed that Chitralekha hid the truth of her husband being a Muslim so that it doesn’t harm her career of being a narrator.

An account named ‘Indian Hindu’ claimed that it was written that the love for the voice of #Aajan has now come to my understanding. The husband was once the #driver of Chitralekha. And #Muslim. After marriage, the Hindu name was kept as Madhavraj so that there would be no problem in selling the story and the business could go on smoothly.

When we tried to know the truth of the viral picture, after doing the reverse image, we found that Devi Chitralekha refuted the above claim on 2 June 2020 from her official Facebook account. She wrote – “False rumours have been debunked. On 23rd May 2017 the marriage of Devi Chitralekha ji in the holy courtyard of Gauseva Dham Hospital was concluded with Hindu rituals with Shri Madhav Tiwari ji, son of Shri Arun Tiwari ji in the Kanyakubj Brahmin family of ‘Kashyap Gotriya’ Kanyakubj Brahmin family of Bilaspur, Chhattisgarh. . Please ignore the rumours…!!!”