Fact Check: Was the car attacked before colliding with the farmers? 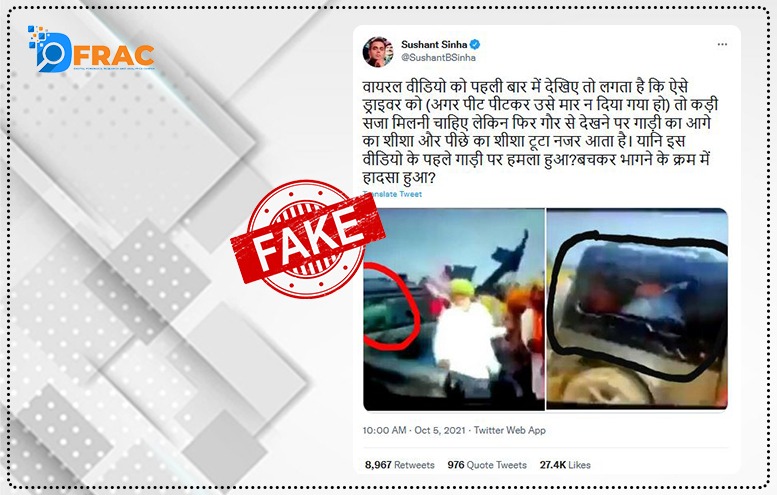 Which when roughly translated to English would mean, “If you look at the viral video for the first time, it seems that such a driver (if he is not beaten to death) should be punished severely, but after looking closely, the front and rear glass of the vehicle are seen broken. That is, before this video was the car attacked? The accident happened while escaping?”

In general terms, he claimed that the car was attacked first and to avoid that attack, the car overspeeded, causing the farmers’ accident. To prove his point, he attached 2 pictures with his tweet, in which he tried to show that the front and rear glass of the car were broken.

Verifying front windshield is broken or not

Studying the effects of light from different angles:

Angle 1: Sunlight from East direction (Direction referred with respect to the image)

In this image, sunlight is coming from front where the yellow line is shown, where the flag is brightening. when that rays strike the windshield, it can be clearly observed that there are no cracks on the windshield and whole glass has the same smoothness as it should be without cracks.

If there had been any crack, the surface would have appeared rough and we could see some marks where sunlight reflections would have been distorted but that is not the case here.

Angle 2: Sunlight from North-East Direction (Direction referred with respect to the image)

In this image, sunlight is coming from North-East direction, falling on the face of farmer and his face can be seen brightening, but when this sunlight strikes the windshield, again the surface of mirror appears to be smooth.

If there must have been distortions, light reflection from that surface would have been different.

Verifying Rear Door Window is broken or not

To check the rear door window of the car, watch the (0:09 to 0:12) part of the video and analyzing the mirror from different angles it was clear that this is the effect of sunlight which was reflected on it from the east side. With the frame attached above it can be very clearly seen that the reflection of sunlight was at play here.

Angle 1:  Sunlight from North-East direction (Directions with respect to image)

In this image, sunlight is coming left side of the vehicle. Hence, the right side doesn’t have the sunlight and it appears to be blackened.

Because of this shadow effect, the circled window in the image can be seen clearly and no deformities or crack is visible.

Angle 2: Sunlight from North-East direction (Directions with respect to image)

As the vehicle moves, the sunlight falls on the window pane and hence it looks bright.

Another thing to be noted here is that glass used in cars are usually made of toughened glass with a plastic film between two layers. Had the glass been broken, then it would have clearly shown up as cracks.

Finally, below we attach two separate videos one where the footage is slowed down to show that none of the car’s shields were broken, and the other higher resolution video that shows the farmers peacefully walking on the road before the car ran into them.

Our frame-by-frame analysis of multiple angles and videos of the incident shows that the shields were not broken. When the vehicle passes, the reflection of sunlight can be seen on the mirror. That reflection is misinterpreted by Sushant Sinha as a broken windshield. Hence, his claim is fake.