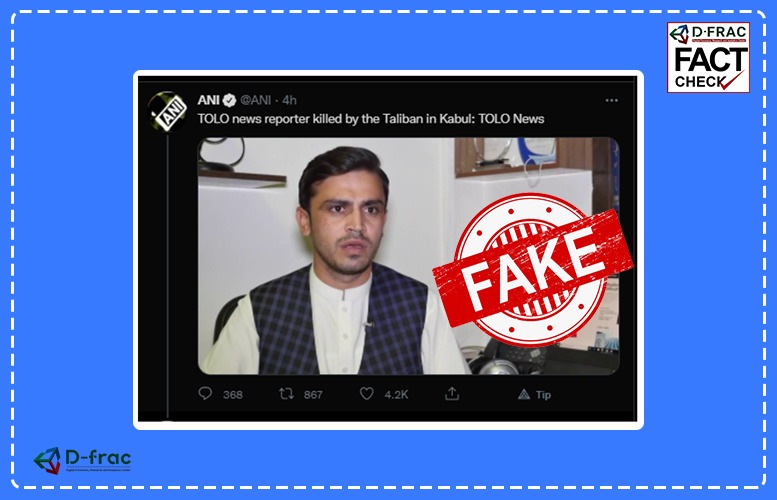 On August 26 2021, TOLO News, a news agency from Afghanistan tweeted that a TOLO news reporter was beaten up by the Taliban. They also attached a link to a news report on the incident from their website. This tweet when translated from Persian to English read “TOLO News reporter killed by Taliban”.

The tweet was then picked up by several news media outlets in India, specifically ANI News and Senior editor of News18, Pallavi Ghosh, all of whom tweeted that the journalist is dead.

Other news media outlets also reported on the event.

Upon just the simplest of searches, we found that the google translator for the tweet malfunctioned and said “killed” instead of beaten. The news report attached along with the tweet when translated reads exactly what happened. The report details how the journalist Ziar Yaad and his cameraman were beaten up by the Taliban at gunpoint.

This however was not paid attention to by ANI, who without even going through the report posted a news update that the reporter was dead. Others followed suit and reported the same.

The false news spread so quickly that Ziar Yaad himself had to take to twitter to explain what exactly happened.

Rather than owning up to their mistake, ANI later clarified that he is not dead. With all the evidence that is there before us, we can conclusively say that ANI simply translated TOLO News’ tweet without reading the actual report and effectively spread fake news all over social media.