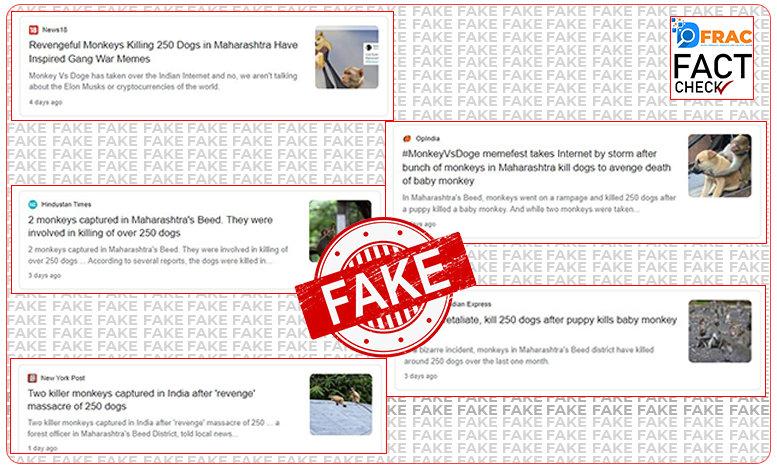 Recently a news has taken over internet in which it is claiming that in Maharastra, Monkeys killed 200 puppies. This news is published by many big National and International Platform which includes The NewYork Post, The Guardians, ANI, News 18 etc.

This news claim how monkeys have allegedly killed the dogs to seek revenge. In the report it is said that in Lavul Marathwada’s Beed District, Majalgaon Tehsil, monkeys attacked dogs. In this attack more than 200 dogs were killed.

On our research analysis our team found that this news is absolutely fake.

Denying the news of revengeful killing of dogs by monkeys, local forest Officer Sachin Kand has said, “around 50 dogs died from hunger”. The officer claimed that animals don’t have the feeling of revenge. They only fight because they are animals, and it’s their tendency. He also said that the number of deaths of dogs is being exaggerated.” The rumour is totally baseless.

Meanwhile, a member of Gram Panchayat Samiti Ravindra shinde has said to BBC that “There are very few monkeys in the village and they come occasionally. But this time weird incidents were seen in the village due to coming of these Monkeys. The monkeys pick up the puppies and took them up on a tree or on a tall house. At first, the villagers didn’t really understand what the monkeys were doing, but then they saw the monkeys slowly running away, leaving the puppies behind.”

Further one of the forest officers DS More said, “There are little fleas in the dog’s hair and the monkeys eat them and they take the puppies just to eat the fleas.”

DS More further said, “Fully grown up dogs can’t easily get into the monkey’s clutches so they took puppies. After eating the fleas, the monkeys left the puppies on the trees or on the roofs of tall houses. From where the puppies begins to die from lack of food or water for two to three days. Puppies cannot descend from such a height and some puppies may die trying to descend.”

Therefore, our team found this news totally fake and baseless.