#5AugustYoumEIstehsal (Day of Exploitation): Propaganda of Hate peddled by Pakistan, 3 years after the abrogation of A-370 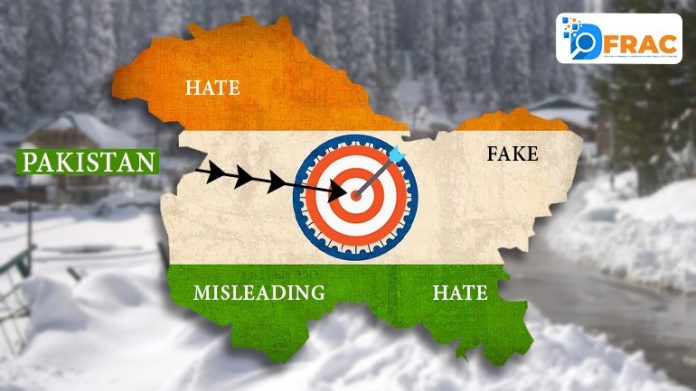 In October 1947, outsider Pashtun tribesmen from Pakistan’s NWFP invaded the region of Kashmir in which thousands of people were massacred. The situation went uncontrolled all over the valley. In one such series of the massacre, 11000 people in Baramulla were killed by the invaders. The then Dogra ruler of Jammu and Kashmir, Hari Singh requested the Indian government to provide protection to Kashmir against the barbaric invaders.

On 26th October 1947, he signed an instrument of accession which is a legal document that ceded J&K to India. On 27th October the Indian army airlifted its troops and stopped the invaders in the valley within two weeks. Since then, Jammu and Kashmir is an integral part of India, and the Indian government taking full responsibility to protect its citizen from outsiders and anarchical forces. However, there have been many attempts by Pakistan to grab the territory of Jammu and Kashmir in the past and it has been a major hurdle in front of India to maintain peace in the region. These include multiple ceasefire violations and many terror funding activities due to which Pak is still on the grey list of FATF (Financial Action Task Force).

On August 5, 2019, the Central Government of India declared Article 370 of the Indian constitution null and void. The tussle between Pak and India over the issue of Kashmir took a new pace after the scrapping of Article- 370. Even after three years, there are umpteen malicious attempts of spreading deceptive information on this issue by Pakistan.

This DFRAC Exclusive report will analyze how Pakistan is trying to spread fake and spiteful misinformations against India on the matter of abrogation of A-370. In that series, on August 5, Pakistan embassies all over the world tweeted about the event to observe Youm-e-istehsal (day of Exploitation).

Claim-1: 60 lakh domiciles given to the Hindus of Kashmir

In the post below, Mushaal Mullick can be heard saying, ”Indian government gave 60 lakhs domicile to Indian People.”

The same claim can also be seen in the post of Daily Nawa-i-Waqt. The English translation of the tweet goes like this, “Kashmiris have been displaced from their own homes and thrown on the streets, 60 lakh domiciles have been given to the Hindus of Kashmir, Mushaal Mullick.” {English Translation}

And, as per the latest development, any person who has been in the territory of Jammu and Kashmir for a period of more than 15 years can apply for the domicile certificate online. GOI is providing domicile to a population living there irrespective of religion. Moreover, providing domicile means giving home not throwing Kashmiris outside on the streets.

A user tweeted, “5 August 2019 illegal action has exposed India before the world as an oppressor and aggressor 5th August is the blackest day for #Kashmiris Modi regime’s 5 Aug 2019 move meant to convert Muslims into a minority in IIOJK.”

Reality: There is no demographic change in the region of Kashmir. Even after three year later the Kashmir valley is a Muslim majority state. In fact, of the 90-member assembly, 47 seats are in Kashmir while 43 seats in the Jammu region. Kashmir is the Muslim majority area with, 97.16% of Muslims, as of 2014. The representation of Kashmir is more means the Muslim representation is more in the region.

In such a situation claiming that the government is trying to convert the Muslim Majority region of Kashmir into a Muslim minority is not right.

Reality: According to ANI, “No civilian and police/SFs were killed in law-and-order incidents after the abrogation of Article 370 in the Valley: Kashmir Zone Police.”

Further, according to official data, number of people died in incidents due to Law and order and terrorism have decreased after 5th August 2019.

Many users have claimed that Indian National Flag were not hoisted anywhere in Kashmir. A user wrote, “It has been three years since India abolished the special constitutional status of Kashmir, Article 370, but Kashmir is still the same for India as it was in the nineties, there is no peak, no building, nothing in Kashmir where the Indian flag can be hoisted.

Reality: There are many incidents in Kashmir where Indian National Flag was hoisted after the abrogation of A-370.

Analyzing over 1,500 users who all interacted with this hashtag, more than 500 accounts were created in July 2022.

The majority of the accounts that tweeted on the hashtags were from Pakistan i.e., more than 1,300 accounts. Around 205 accounts participated from India as well which were mainly from Jammu & Kashmir. 68 accounts from United Kingdom, 130 from Thailand

This DFRAC exclusive have highlighted the propaganda of Pakistan against India over the issue of Kashmir. In many hate centric posts, the logo of Desire for freedom, Youth forum for Kashmir were used. It is a platform majorly operated by Pakistan. Pakistan had launched an Anti-India campaign of observing Youm-EIstehsal (day of Exploitation) on 5th August. To fulfil this agenda, it has left no stone unturn. There are lot of hateful and deceptive information posted by Pakistani social media. There have been efforts by Pakistan to portray that lot of atrocities is done on Muslims in Kashmir by the Indian Government.  More than 30% of the population of the region is non-Muslim but the Pakistani government never seems to be concerned about them.