Fact Check: Truth Behind the video of three policemen brutally beating a man. 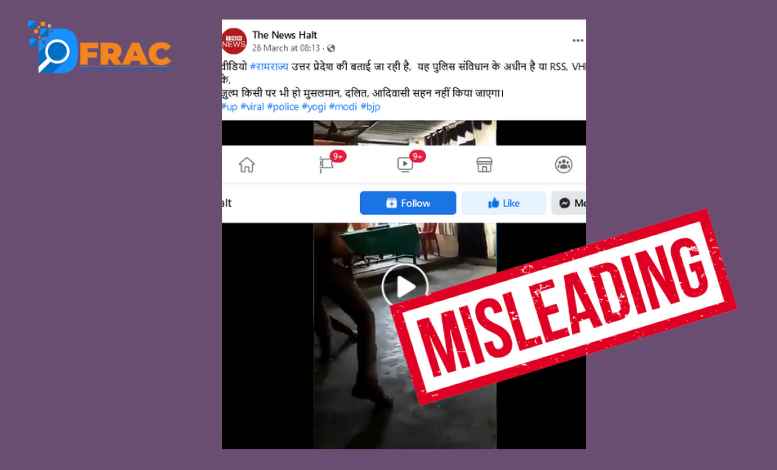 A video of two policemen brutally beating a man is allegedly shared on social media sites.

The video is shared with the claim that 3 police personnel are beating up a man brutally inside a police station for stealing a mobile phone.

People all over the Internet are showing their agitation against the brutal beating.

A Facebook user states, “The video is reportedly from Uttar Pradesh. I would like to ask whether the Uttar Pradesh Police is under the Constitution or under RSS, VHP. Atrocities, be it on Muslim, Dalit or Indigenous people, will not be tolerated.”(Translates Hindi) reads the caption.

The archive link of this video shared by a page named muslim awaz is here.

We at DFRAC reverse searched this image to know the reality of the video. We found that the video is as old as 2020.

NDTV shared news under the headline, “on, camera 3 UP cops pin suspected phone thief to ground torture him.”

A Twitter user named Alok Panday shared a Tweet on the same incident, but in the year 2020.

This is the @deoriapolice , viciously assaulting a young man accused of mobile theft by his neighbour , inside a police station. One cop tries to smash the man's face with his boot , the man is hit multiple times with a belt as other cops pin him down . Three cops suspended … pic.twitter.com/hzDplXrDv0

The video is of UP only, but not of the recent times.

Previous articleFact check: Did the picture of Mahatma Gandhi appear on currency note came in 1996?
Next articleFact Check : Did the 9 year old Ukrainian girl holding gun to fight with Russian force?