Fact check: Did Zelenskyy wear a symbol of Germany in his piece of cloth? 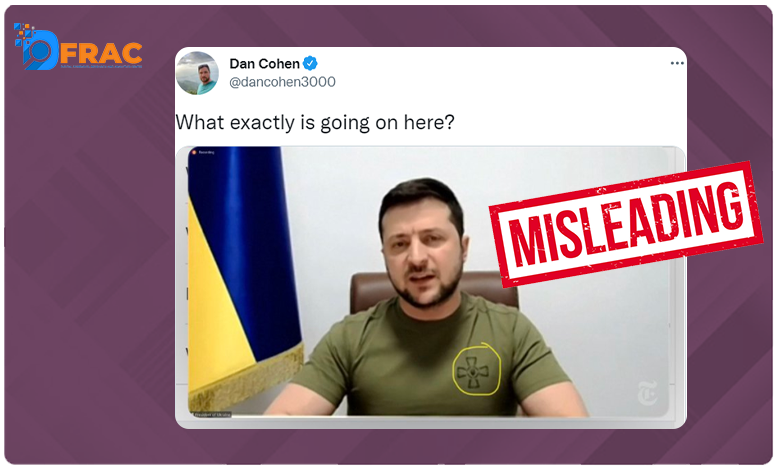 A piece of news is going viral on social media where Ukraine President Volodymyr Zelenskyy, is claimed to be a Nazi supporter.

Dan Cohen posted a picture of Zelenskyy, wearing a green colour T-shirt with a mark of the cross and claimed that the cross mark represent the symbol of the Nazi Germany Army.

What exactly is going on here? pic.twitter.com/Xq6a6H2Bs3

Thongrit Rit Jarupak, posted a collage of Zelenkyy and Hitler while highlighting the mark on their shirt and uniform respectively. He accused Zelenskyy of being like Hitler and destroying Ukraine.

After researching we found out that originally the emblem belong to the Ukraine Army. Zelenkyy wore Ukrainian emblem and not German emblem.

On Wikipedia, we found the viral picture categorized under the Armed Forces of Ukraine.

Official site of Ukrainian Army has the same logo.

Furthermore, the viral image is of the Zenlenskyy addressing US Congress about necessity of more medical aid in a conference meet. Zelenskyy mentioned that Ukraine is witnessing 9/11 every day while fighting with Russian Forces and he also urged for sky protection from NATO and US alliances as per the report of BBC.

Hence proving that the viral claim is misleading as Zelenskyy wore the emblem of Ukraine and not of Germany.

Claim review: Zelenskyy wear a symbol of Germany in his piece of cloth