Fact Check: Did Russia recuperates the restaurants abandoned by Mac Donald’s and renames them DonMak?

Russia has declared war on its neighbor Ukraine. Since then large-scale destructions and killing is going on the soil of Ukraine. Earlier, in 2014 Russia had annexed the Crimean Island. And, now when  Putin has recognized the Donetsk and Luhansk region of eastern Ukraine as an independent. The Donetsk and Luhansk are collectively known as Donbas. The situation got worsened and eventually led to this military operation of Russia on Ukraine. Meanwhile, an image of a restaurant is getting viral on the internet. The claim with the picture is that Russia recuperates the restaurants, Mac Donald’s had abandoned and renamed them DonMak. Further, sharing the image Feedback Express wrote that, “Russia recuperates the chain of restaurants abandoned by Mac Donald’s and renames them DonMac.#JustSoYouKnow, Cola cola, Mac Donald’s, and a few other companies sanctioned Russia by stopping business in the country in protest of the invasion of Ukraine.” 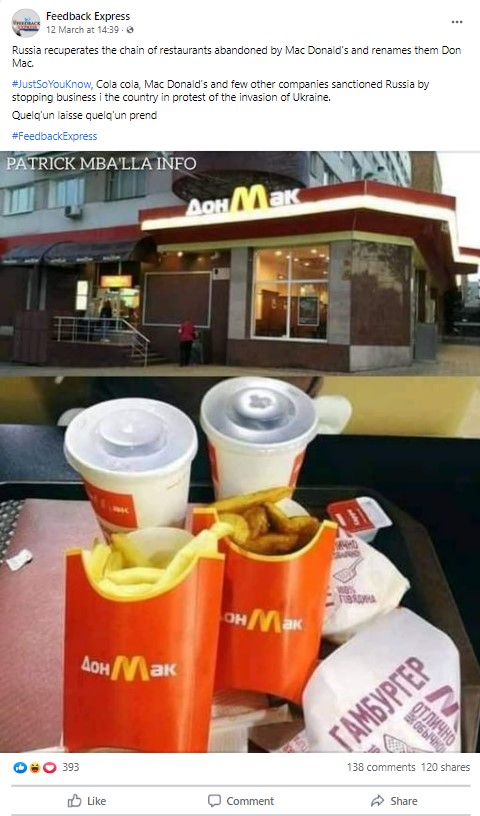 In the same vein, hundreds of people shared this picture.

To know the reality we did a reverse image search. And, we found the viral image on a report of vice which was published on 30th March 2017. Moreover, the heading of the report was DonMak, Burger Impersonator. In the report, they mentioned that the Pro Russians recuperates abandoned McDonald’s restaurants throughout the city of Donetsk and rebrands them DonMak. 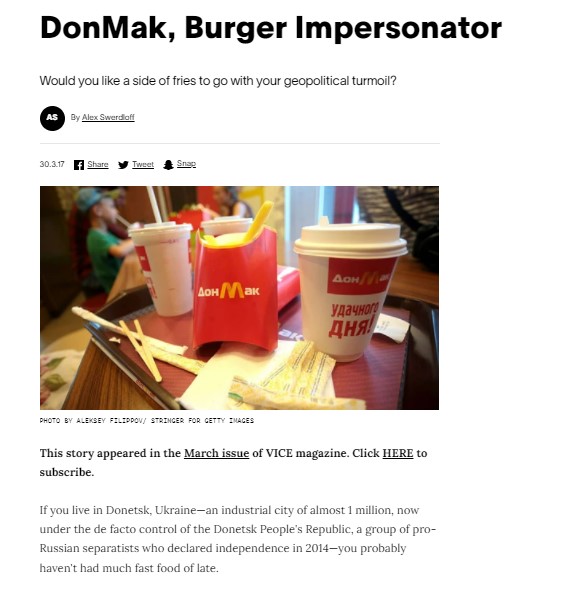 Hence, users have shared an old picture with the fake claim of Russia running a new restaurant at the places abandoned by Mac Donald’s and renaming them DonMak. DonMak was opened in Ukraine in 2016 after McDonald departed from pro-Russian cities.

Therefore, from our fact check analysis it is clear that the viral pic is old and the claims related to it are fake and misleading.