Fact check: A fake picture from the protest of Railway students got viral 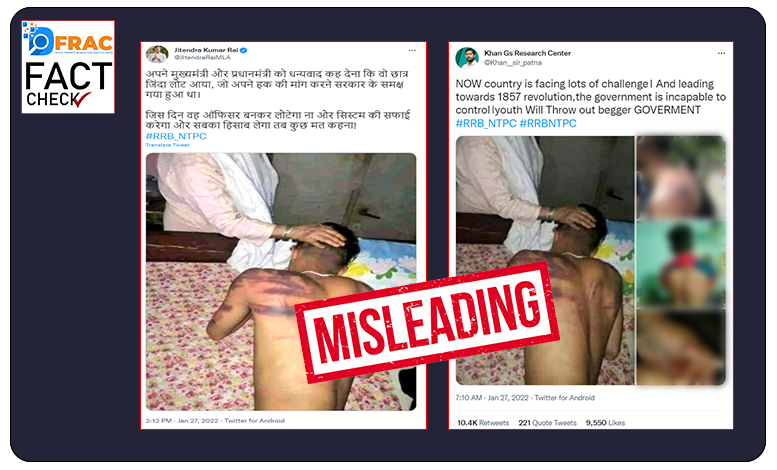 The news of Khan Sir Conspiracy during the protest of railway results is in the air. Many claims and fake news are getting viral on social media platforms. In between all the things, there is a picture of a man who got beaten up badly and is lying on his bed injured is getting viral. Users are claiming that the man was tormented by UP police during the protest of Railway students. Users are also criticizing UP CM Yogi and PM Modi for the cause. The tweet embedding picture of an injured man has been seen on 27th January 2022. 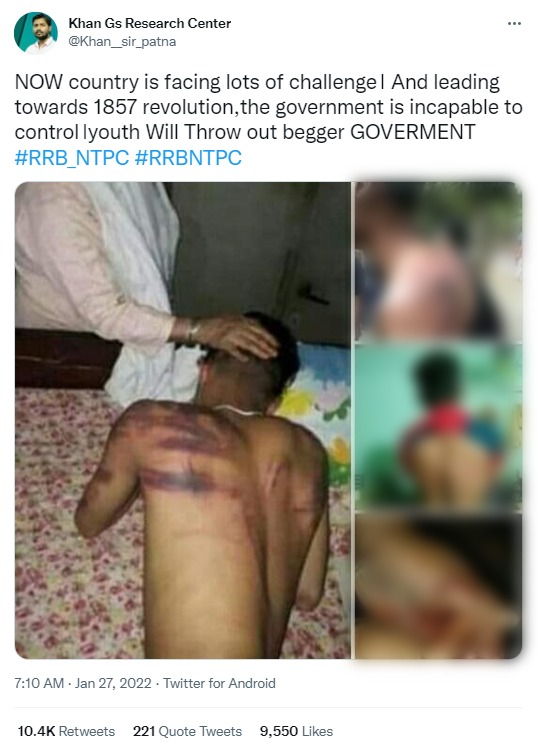 A verified account on Twitter and a renowned personality like Jitendra Kumar Rai (MLA from Marhaura)  has also posted the same picture by addressing UP CM Yogi and PM Modi, “Thanks to your Chief Minister and Prime Minister that the student who had gone before the government to demand his rights has returned alive. The day he returns as an officer and cleans the system and takes account of everyone, then don’t say anything! #RRB_NTPC”

In short- A picture of a brutally beaten up man is getting viral on social claiming that he has injured during the Lathi charge.

The picture has been used by different users at different allegations. A Bengali account on Facebook posted the same picture claiming that the man has been persecuted by an Islamic father for the sin of loving her daughter. The post was done on 17th July 2019.

Another use of injured crow

Interestingly, West Bengal Police has posted the same picture claiming that fake news is getting viral in Lockdown against West Bengal Administration on 27 March 2020.

Final thesis of the viral picture

A well-known news website like Malaysia Daily News has posted the claim that the picture of an injured man is from Malaysia and the viral photograph belongs to the year 2019. The website has posted this article regarding how people are punished for the offence like spreading fake news got published on March 31st 2020.

Conclusion- The viral picture came into existence in the year 2019 and different claims are made on the same picture before the Railway recruitment protest in January 2022.

Previous articleFactCheck: Did CM Yogi Adityanath accept that he is a pro-Rajput leader?
Next articleWho is Pieter Friedrich? An Internet Gunman or So-Called Torchbearer for Minorities in India