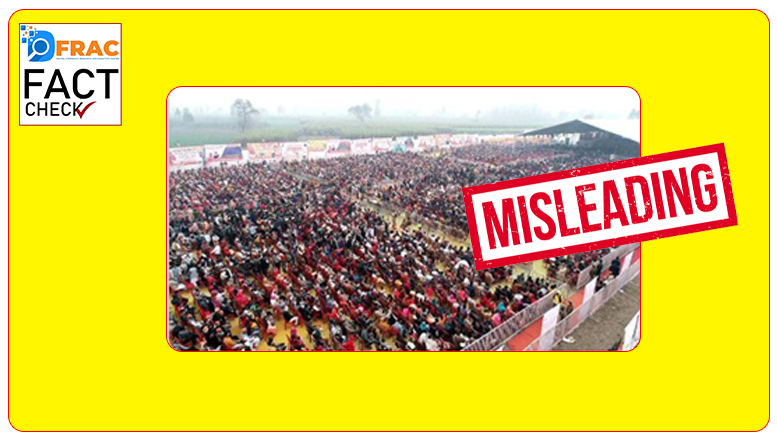 Political turmoil has been going on ever since Prime Minister Narendra Modi’s public rally was cancelled in Ferozepur, Punjab on January 5. The BJP accused the Congress government in the state of playing with the prime minister’s security citing protesters blocking the road in the Hussainiwala area of the district. The Congress also hit back saying PM Modi cancelled his program due to low attendance at the rally venue.

Meanwhile, a picture is going viral on various platforms of social media and a huge crowd can be seen. The picture was accompanied by claims that it is a crowd of PM Modi’s rally venue.

One user tweets on the picture which Google translates in English that “So much crowd that too when hundreds of buses coming to PM’s rally were stopped by the Punjab government on the way itself, If there was no crowd then why did the PM stop??”

On examining the viral picture, it was found that UP Chief Minister Yogi Adityanath had a rally held at Deoband in the Saharanpur district. The photo was posted by CM Yogi on his official Twitter handle on January 4, 2021.

According to TOI, CM Yogi had laid the foundation stone of the Commando Training Centre of the anti-terrorism squad (ATS) at Deoband during this period. Addressing a public meeting, he said, “A total of 56 commandos will be deployed permanently here. This is my message to terrorists: If you conspire against the nation, our commandos will destroy you, wherever you hide. ”

Conclusion: Hence, the above viral picture has been shared with fake and misleading claim.