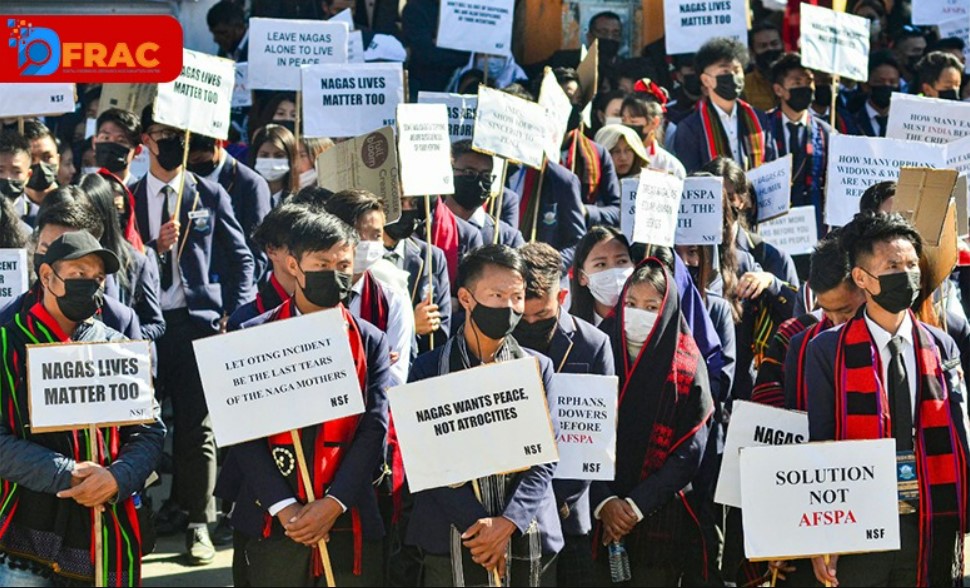 When was the last time the Indian Army had expressed regret over a military operation gone wrong, especially in areas where the Armed Forces Special Powers Act (AFSPA) is in force. The nature of this law, originally named as Armed Forces (Assam and Manipur) Special Powers Act, has always left the scope of such botched up operations due to special powers owned by the armed forces. Such botched up operations have been going on in Kashmir since decades. Rarely, a unit of the Army, that too special forces, expresses regret over ‘mistakenly’ killing of civilians. But it did when 14 villagers died in an ambush firing and protests that followed in the Mon region of Nagaland on December 4 and 5.

Activist Irom Sharmila with her 16-year-long hunger strike is the epitome of resentment by civil society against eradication of AFSPA, especially from Manipur, where it has been functional since the last 60 years.

In this context, various videos circulating on social media showed a group of men attacking security forces with the claim that it shows civilians in Nagaland confronting the army and provoking them to retaliate. In the video, a man can was also seen putting a knife on a soldier’s neck. Another video shared by a prominent Congress leader from the region showing young boys airplaying instruments and singing local songs. The leader claimed the video was shot a night before of these villagers being killed in the ambush. While the authenticity of the first video showing confrontation was later identified as being from columbia, the second video remains unverified till date. But the aim and motive these videos served was achieved as they added to the frustration and anger of the local people.

The Army’s note was followed by regret by leaders from all across party lines, which indicates the possible severe implications in the North-East region after this incident. The region has been marred with militancy and tribal conflicts since last several decades and very recently the central government in far-flung Delhi was able to reach out to various organisations and get them to sign a peace accord, thereby, signalling peace in the region. This peace is at stake now. The stakes that are too high and weak.

Apart from misinformation and fake content, the other aspect was Home Minister Amit Shah’s speech in Parliament mentioning that ‘the vehicle carrying villagers was asked to stop, but tried to flee’ that added fuel to fire and didn’t go down well with the people in Nagaland. Last week a massive march in Mon called the speech ‘fabricated and false’. The fact that the army that was present on the spot and carried out the whole operation did not mention the fleeing part in its regret note.

More bad news came in the following days when the Konyak Union (KU), the apex body of the Konyak Naga tribe that resides in Nagaland’s Mon district, announced “non-cooperation” with the armed forces.

The Centre’s biggest worry is now in the open and taking the shape of a rebellion. The village labourers that were killed in the incident belonged to the Konyak tribe, the biggest in Nagaland with a population of over three lakh fifty thousand. The government just can’t afford to make them unhappy.

Therefore, the central government was immediately active about this incident. But with this incident, the various groups involved in talks with the Centre may be under civil pressure to express public anger or even opt out of any deal to bring peace in the region.

The reason for this is that these killings have not happened due to the operation of Nagaland Police for which the state government can be held responsible or the involvement of local police personnel. This is an Indian Army operation that botched up enormously. This may undermine the credibility of peace talks.

The Centre has been trying to negotiate with various factions of the National Socialist Council of Nagaland i.e. NSCN (the state’s largest extremist organisation) since long. With the efforts made by various government agencies in the last several years, the government made it possible to bring various militant groups to the negotiating table. These include groups led by Khango Konyak and Niki Sumi, that possess considerable influence in the region of Nagaland that borders Myanmar.

During the course of time, the government in Delhi also entered into a ceasefire agreement with a militant group for peace. While the groups signed a draft agreement with the central government in 2015, they demanded separate constitution and flag at the time of the final agreement, which created a deadlock that was under process since then to avail any resolution.

So far, only the NSCN has been the biggest hurdle in the finalisation of the Naga peace accord. All other Naga groups, which jointly form Naga National Political Groups (NNPG), want a peace accord to be achieved. However, due to this incident, the rest of the group can also withdraw from the talks for some time.