M. Nageswara Rao, former CBI Director spreads fake news and hateful remarks against anyone who is not Hindu 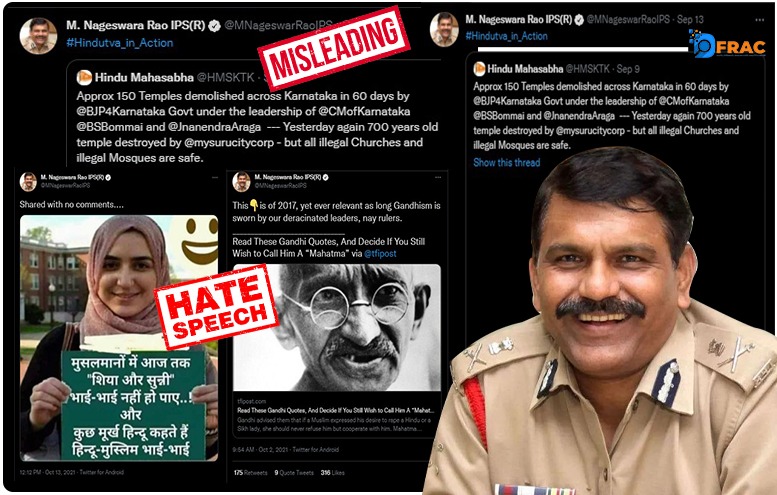 M. Nageswara Rao is an IPS officer who served as the interim-Director of Central Bureau of Investigation (CBI) for a brief period in 2019. Rao is now retired but continues to be very active on Twitter where he is known to post polarizing views about a variety of topics. He also regularly writes for Op India and Swarajya Magazine. In the articles that covered his somewhat unique ideology, we came to understand that Rao believes that Hinduism is the only marker of India and nothing else.

Some of the more contentious tweets posted by him include his comments on child marriage and that the age of marriage should be left upon the parents of the child and essentially implying that children should be able to marry as soon as they reach puberty, which is usually 12-13 years old for most females.

Apart from the hate displayed in his tweets, he also posts  a series of fake claims on his feed that end up getting a lot of views. Here we are fact-checking some of them.

On October 13,2021 he posted a picture of a woman in a hijab holding a plaque that makes derogatory comments about Muslim community implying that there is disharmony between the two sects.

On October 13,2021 he posted a picture of a woman in a hijab holding a plaque that makes derogatory comments about Muslim community implying that there is disharmony between the two sects.

However, this claim is misleading. According to media sources that we looked into, the order was passed in Karnataka to demolish 6,395 structures in the state that were existing illegally. Religious considerations were not undertaken. However this offended people who accused the government of erasing only temples and nothing else. This has been proven untrue.

On October 2,2021, Rao posted an article about Mahatma Gandhi saying that the article will make you lose faith in Gandhi and will make people stop considering Gandhi as the father of the nation.

The article itself features “quotes” said by Gandhi along with a baseless critique of Gandhism. Relying on whataboutism and strawman arguments the article tries to convince the reader that everything Gandhi stood for is fake.

The quotes listed in the article have been provided with sources most of the coming from indiafacts.com which is a known conservative website that relies on word of mouth, rumours and myths rather than documented history.

Therefore, this claim too is misleading.

Rao’s history of hate speech against minorities has previously landed him in trouble when former IPS officers denounced him for his comments on the desecration of Hinduism because of “Islamic” elements. CPI(M) even launched a complaint against him for the same.