Fact-Check: Were most of AIIMS built under Prime Minister Narendra Modi’s regime? 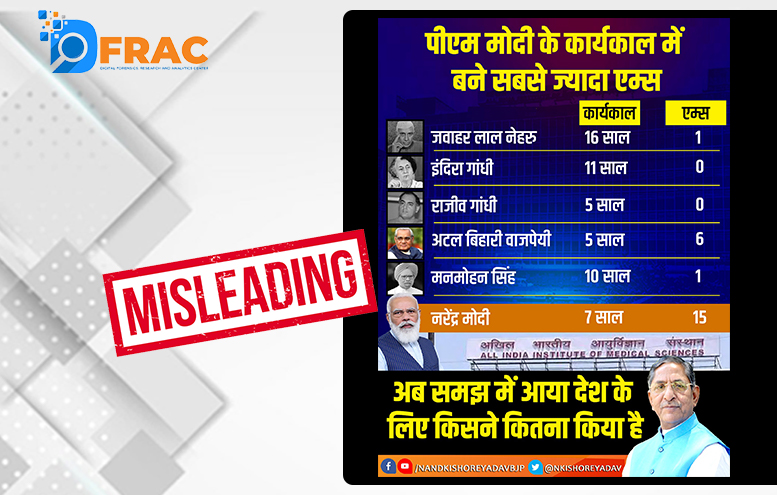 Among many who shared the claim was Nand Kishore Yadav, former cabinet minister for road construction and health in the Government of Bihar. His shared post showed that PM Modi had built 15 AIIMS hospital in 7 years. His tweet got more than 50 retweets and 218 likes.

Set Up of AIIMS:

The first AIIMS was set up in 1956 in Delhi under the All India Institute Medical Sciences Act, 1956 and was formed under the leadership of India’s first health minister Amrit Kaur. Later, for as long as 47 years, i.e from 1956 to 2003 there was no declaration of construction of AIIMS hospitals.

The setting up of other AIIMS has been divided into different phases with the first phase being announced by former Prime Minister Atal Bihari Vajpayee in 2003 during his Independence Day speech.

After when UPA came into power, the PMSSY was approved and launched by the Union Cabinet in 2006. Subsequently, six new AIIMS, under the PMSSY scheme were set up in Bhopal, Bhubaneswar, Jodhpur, Patna, Raipur and Rishikesh.

After some research and analysis on this subject we found this claim to be misleading although six AIIMS were announced by the Atal Bihari Vajpayee-led BJP government, they were established during the time of the United Progressive Alliance government.

As per the reply given by the Lok Sabha in September 2020, a total of 22 AIIMS have been announced/sanctioned to be established under the PMSSY.

Six AIIMS that were set up in the first phase are functional, remaining 16 AIIMS are at different stages of construction out of the ones announced under the PMSSY.

The PMSSY website also gives a status updated of 22 AIIMS that showed that some of the remaining 16 AIIMS institutes have started a few services.