HomeHateFrom Arshdeep to Shami: How are the Pakistani Twitterati fueling wrath against...

From Arshdeep to Shami: How are the Pakistani Twitterati fueling wrath against Indian cricketers? 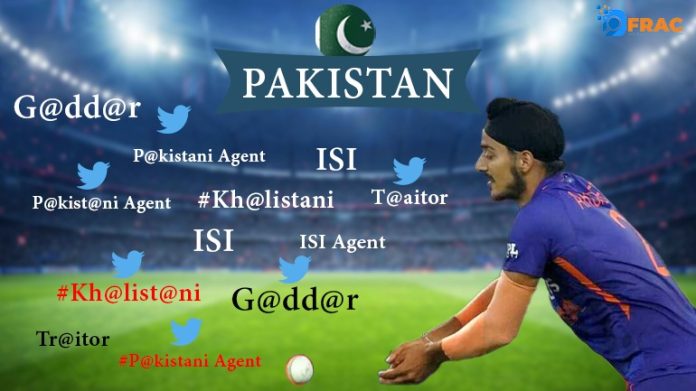 It is interesting how a catch drop during a cricket match can be used and blown out of proportion to create a false narrative against a country and its population. This DFRAC exclusive report is an in-depth analysis of the nature of such hateful tweets and their sources in a particular case. This report also unveils some of the common personalities who were behind the backlash against the Indian cricketer Mohammed Shami in the past.

Key points of the report.

What caused the wrath against Arshdeep Singh?

The Indian cricket fans were quite disheartened after India lost to Pakistan in a very sensational and important match in Asia Cup 2022. After the match, 23 yr old Indian cricketer Arshdeep Singh was caught in the eye of a storm for dropping a catch against Pakistani batsman Asif Ali.  There has since been massive criticism over the internet against the cricketer. He was also referred to as an ISI agent and a Khalistani in various tweets.

This is not the first time any cricketer is facing such a backlash, after India’s defeat by Pakistan. Last year in the T20 World Cup 2021, India was defeated by Pakistan. Even at that time, similar hate was seen against the Indian batsman Virat Kohli, the Indian bowler Mohammed Shami, and Rohit Sharma. At that timeShami too was called an ISI agent. DFRAC has already done an exclusive report earlier on that issue.

Analysis of the backlash against Arshdeep.

As soon as India lost the match against Pakistan, #ArshdeepSingh began trending with more than 27,000 tweets. Around 4,500 tweets were trending with #Khalistani.

Where did it all start?

Further, the keyword was mostly used in Pakistan, followed by India and UAE.

Similar activities conducted from Pakistan and UAE, intending at amplifying misinformation, have been observed in the past especially during the Prophet Row and the Moosewala case. Detailed DFRAC analysis reports of the same are provided here and here respectively.

When the DFRAC team searched for “Khalistani” on Google trends, it showed that the keyword’s timeline had started on the 4th of September and then gradually gained pace on the 5th of Sept.

The users interested in the keyword were majorly from Pakistan.

Wrath created by the Pakistani Twitterati.

Wikipedia page of Arshdeep Singh was edited on 4th September. It can be seen below how the changes have been made on the page and “India” was changed to “Khalistan”.

It is clear that the IP address 39.41.171.125 from where the Wikipedia page was edited was from Punjab, Pakistan. The Internet Service provider is Pakistan Telecommunication Company Limited.

In response, the Indian government has summoned Wikipedia executives with respect to the spread of misinformation.

Soon after, social media exploded with Tweets about Arshdeep Singh. Many Pakistani social media users trolled Arshdeep Singh for dropping the catch. A lot of users have also called him an ISI agent or a Khalistani. Some of these derogatory tweets are shown below.

Details of new accounts created in the wake of Ashdeep’s Backlash.

Analyzing more than 20,000 accounts that interacted with the hashtags (#ArshdeepSingh and #Khalistani), it was found that more than 100 of these accounts were created on the 5th of September alone, and later tweeted on the hashtags.

The collage below contains tweets of some of those users which were created on the 5th of September.

According to the wordcloud given below on the tweets on Arshdeep Singh., the most used words include, “Khalistani”, “Pakistani”, “Gaddar”, “Agent”, “Deshdrohi”, etc.

There were more than 120 common users who tweeted on both the hashtags, #Shami and #ArshdeepSingh. Some of the Pakistani accounts are shown below:

A collage with the screenshot of the tweets against Arshdeep went viral on social media. In that college majority of the accounts were Indians.

On the DFRAC research, it was found that the collage was biased in nature as it majorly contained Indian accounts. However, many of the accounts that initially tweeted on the keyword “Khalistani” in the time frame of 11:05-11:20 p.m. were from Pakistan.

Ironically, a large section of Pakistani Media houses and journalists have criticized India for the hatred spread against Arshdeep on social media.

@GeoNews_Urdu tweeted that, “Dear Arshdeep Singh! You’ve just started your career. Indo-Pak matches are pressurising. You dropped a catch and it’s a part of the game. However we feel sorry the way indian cricket fans treated you, abused you, called you khalistani. Stay strong bro! All the very best from Pakistan!” There were similar reactions by many others as well. Below are two collages showing the verified Pakistani users who have criticized India over this matter.

Superficially, it seems that the posts against Arshdeep were made by the disappointed Indian fans, but the real story is way different. In the past too Pakistani Twitterati propagated a similar narrative against the Indian Cricketer Mohammad Shami.  This DFRAC Exclusive here provides evidence that it was in fact the Pakistani Twitterati’s that created a false narrative about the Indians targeting Arshdeep Singh. The majority of tweets against Arshdeep Singh were done by the Pakistani social media users. This report also highlights an attempt to highlight religion based-hatred against Arshdeep Singh (Sikh) and Mohammed Shami (Muslim).

The plausible reason behind could be to malign India’s image internationally. Further, these kinds of propaganda have the potential to incite hatred among different religious communities within India.