HomeOpinionAlarming data on religious hate staring India in the face

Alarming data on religious hate staring India in the face 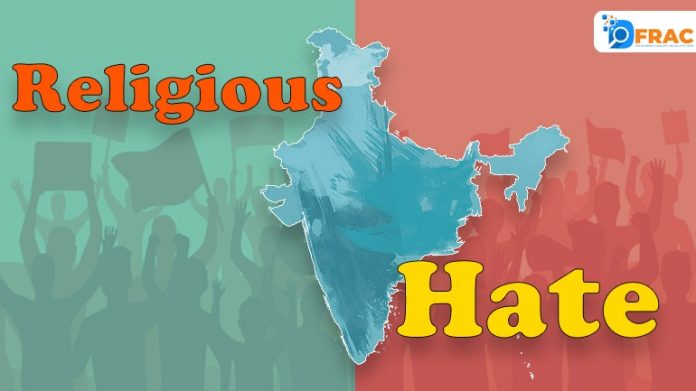 According to various researches published in the last few years including one by Amnesty International, India has seen a rapid increase in incidents of alleged ‘hate crime’ since 2016. As many as 150-200 incidents of such crimes were registered every six months since.
This figure has doubled compared to the last three years, which shows a dangerous trend in the country.

Targets made in the name of religion
Researchers say that in India people are targeted on the basis of their caste, religion and gender identity. There, the commitment to end hate crime and the country’s penal laws requires that we first recognize the bias behind the commission of such crimes. Also, such incidents should be documented. Both these things are clearly missing from the current scenario.
The surveys have continuously classified incidents on the basis of what was the level of violence, against whom it was directed, and what was the motive behind committing such crimes.

What do the figures say?
From September 2021 to April 2022, a total of 902 hate crimes were recorded in India. A total of 181 incidents of alleged hate crimes were registered between January and June last year. The 37 reported incidents were such in which victims were killed.
More than two-thirds of the victims of the incidents between January and June 2020 were those who suffered because of their Dalit identity. This was followed by Muslim (40), Adivasi (12), Christian (4), and sexual orientation or gender identity (6) on the basis of real or belief.
Some alleged hate crimes against Dalits took place because of preventing them from accessing public property like roads, water, crematoriums, schools, etc. 17 incidents of hate crime were registered in the name of cow protection and honor killing.

Communities that top the list of victims?
Many victims were targeted because of their unique identities. If we talk about hate crimes targeting women, the victims were identified as Dalit, Muslim, Christian, Adivasi or LBT (Lesbian, Bisexual and Transgender). In 30 of these incidents, women were either raped or sexually assaulted.
Similarly, after the suicide bombing of Pulwama in February 2019 that killed 42 members of the security forces, there were 14 incidents of mob attacks on Kashmiri Muslims in the country. Most of these victims were small Kashmiri traders living in other parts of the country. In the first half of 2019, the highest number of reported hate crimes at 37 happened in February. On the second number, 36 such incidents happened in March.

Muslims most affected
In all, there were 72 hate crimes in which mobs were involved. Half of these incidents (37) were directed against Muslims. In all such incidents, the victims were either forced to say ‘Vande Mataram’ or ‘Jai Shri Ram’ or ‘Jai Hanuman’ or ‘Pakistan Murdabad’ or asked to take off their caps. There were five such incidents in which the victims died. Since September 2015, Bharatiya Janata Party-ruled states such as Uttar Pradesh, Gujarat, Rajasthan and Haryana, AIADMK-ruled Tamil Nadu had the highest number of incidents of alleged hate crimes. Uttar Pradesh topped the incidents of hate crime among all the states of the country. Between 2015 and 2021, there were 316 such crime reports in Uttar Pradesh.

Supreme Court guidelines not followed
Researchers say that accurate information on incidents of hate crime in India is not available. Because barring a few exceptions, the law here does not recognize hate crimes as separate offenses.
The result is that government data is not available on the discriminatory motive behind the crimes. The alarming rise in the incidents of alleged hate crimes clearly shows the lack of implementation of the Supreme Court guidelines. This led to a lack of accountability and increased audacity to commit such crimes.
However, in July 2018, the Supreme Court insisted on a clear definition of ‘lynching’. Also asked the state governments to take effective steps to prevent mob violence. Rajasthan and Manipur are the only states that have passed relevant laws.

Central government’s stand
On the other hand, the central government says that the state governments are capable of making laws on ‘mob lynching’. In the absence of a clear law, such offenses are registered under sections related to ‘rioting’, ‘unlawful assembly’, ‘murder’, ‘criminal intimidation, and ‘intentional insult with a view to causing a breach of the peace’. This reduces the magnitude of the crime. All this makes the data not only inadequate but also misleading.
The National Crime Records Bureau (NCRB) publishes annual statistics on crime incidents. But since 2016 it has not issued a report on ‘Crime in India’. Various researchers are of the opinion that with regard to hate crime, it is necessary that the data should be reported at all levels by categorizing it on the basis of the type and nature of the crime. This includes reporting, investigation, prosecution and sentencing at all levels. It is imperative that the investigating officers investigate suspected hate crimes expeditiously, fairly and in all respects.
At the same time, they say that prosecution officers should bring the discriminatory motive to the notice of the court when there is sufficient evidence. Most important is that hate and hate crime should be publicly condemned, and for this there should be initiative from the politicians.