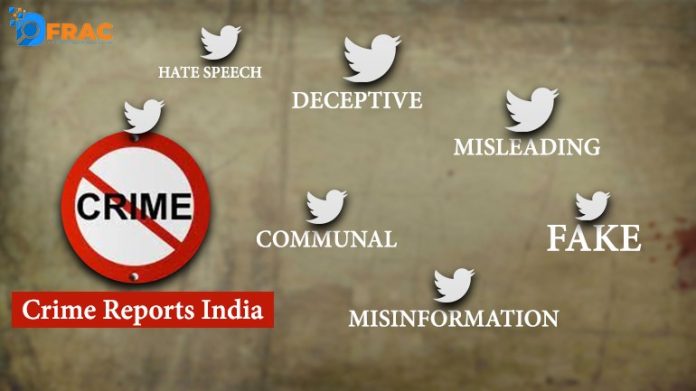 There are many accounts on Twitter that in the guise of sharing information function in a way to fulfill their agenda. Crime Reports India (@AsianDigest) is one such account. The account generally posts the link to different news articles. Moreover, as per the account’s bio, it reports crimes in India. The account is dedicated to reports on crimes committed against minorities in India.

In this DFRAC exclusive, we will expose how this account Crime Reports India is spreading deceptive, biased, and hateful information.

Furthermore, scrolling through the account we can find many fake, misleading, and manipulated news that has the potential to misguide people. We have analyzed its tweets and categorized some of them according to the manner of the tweets below. 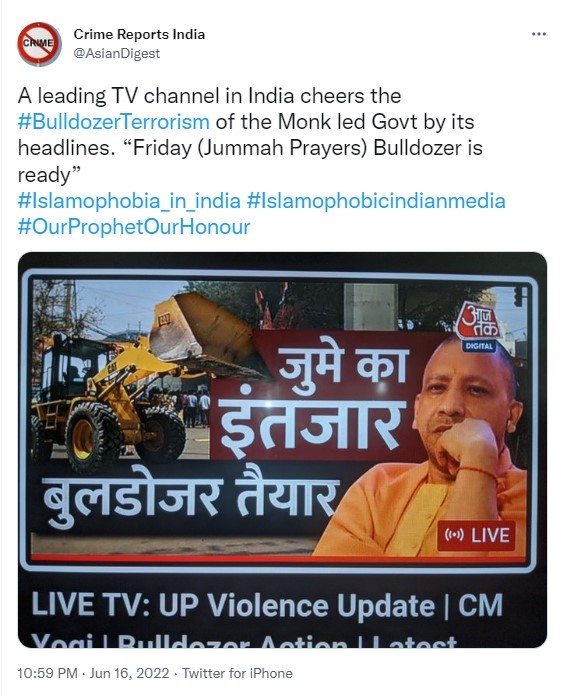 Crime Reports India has shared a screengrab of news of AajTak digital in which it is written, Jume ka hai intzar, Buldozer hai tiyar.” Further, it gave the caption, “A leading TV channel in India cheers the #BulldozerTerrorism of the Monk led Govt by its headlines. “Friday (Jummah Prayers) Bulldozer is ready.”

But, in our keyword research we found no such show with the headline, Jume ka hai intzar, Buldozer hai tiyar was run on Aajtak Digital. 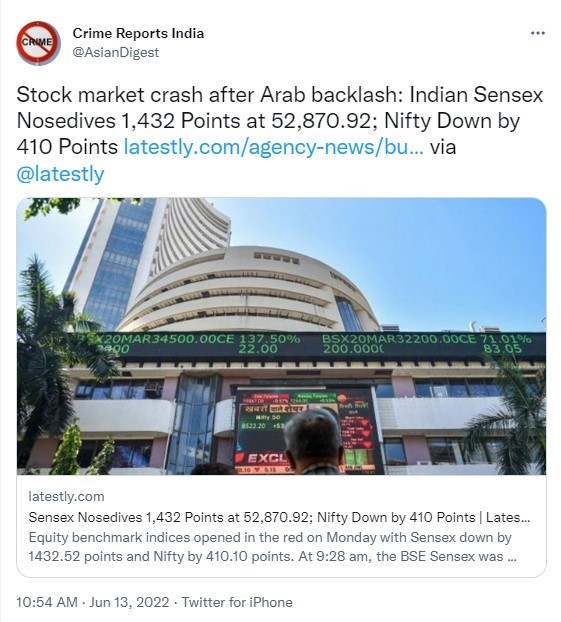 Crime Reports India has shared a link of the news with a caption, “Stock market crash after Arab backlash: Indian Sensex Nosedives 1,432 Points at 52,870.92; Nifty Down by 410 Points.”  And, giving link to an article of latestly.

On 12th June, the account shared pics of pictures of karauli riots with the caption, “Indian Police never used force or bullets when the Muslims were being attacked by Hendus.” In another such tweet sharing the picture of Agnipath protest, adding communal flavours it wrote, “Indian Police being attacked with stones but no retaliation or firing because they are not muslims.” 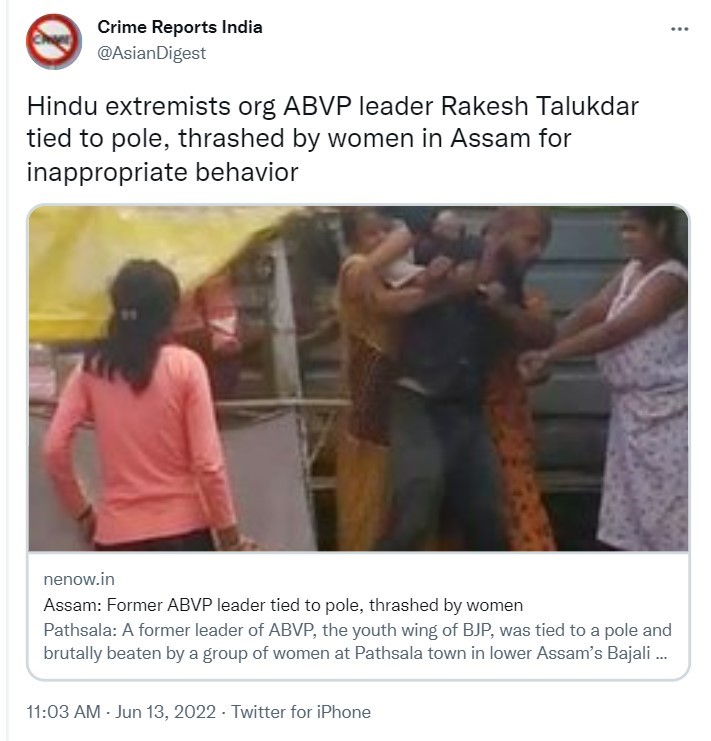 It shared an article of nenow.com with the caption, “Hindu extremists org ABVP leader Rakesh Talukdar tied to pole, thrashed by women in Assam for inappropriate behavior.” 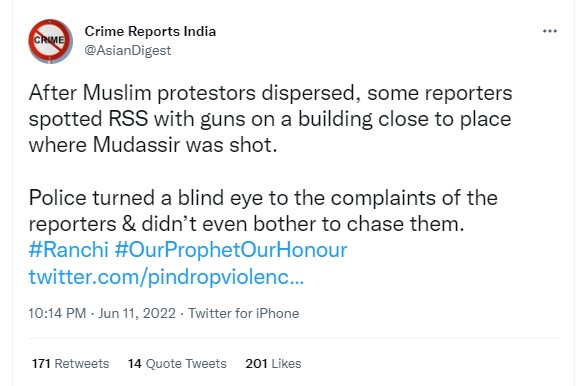 In one of the tweets, it wrote that, “After Muslim protestors dispersed, some reporters spotted RSS with guns on a building close to place where Mudassir was shot. Police turned a blind eye to the complaints of the reporters & didn’t even bother to chase them.” And, gave a reference to a link which is not functional. Also, there is no such news covered by any media houses. Hence, there is no credibility of the information given by the account.

Further, the account have posted many tweets about this incident.

In one such tweets it blamed Indian Police to shot 15 yr old Mudassar dead and wrote, “15 yr old Mudassar who was shot by Indian police in protest against insult of Prophet Muhammad (pbuh) his last words were “Islam Zindabad.”

And, in another tweet it shared a link of a report with the caption, “Hindu extremists Bhairav Singh was firing from the Temple. Who killed Muslim boys Mudassir and Sahil protesting against insult of Prophet Muhammad (pbuh) Will their be Justice?”

The matter is under investigation but targeting Indian Police and writing that the boy was shot dead by Indian police without any proof is misleading.

Along with a video of a man getting beaten up on the road it gave the caption, “Saffron Clad perverted criminal thrashed by woman for Eve teasing and indecent behaviour. People also joined to beat the man #saffronterrorism #Saffronshawl.”

The incident is of Madhya Pradesh where a man was beaten for eve teasing. Just because the man was wearing a saffron scarf it gave the hashtags like #saffronshawl and #saffronterrosism. Saffron is a colour generally wore by Hindu monks and these hashtags are use to target Hindu conservatives or monks.

In another such tweet sharing a video of a shop getting robbed, it gave the caption, “Dacoits wearing Saffron clothes rob a shopkeeper for 13 Lakh Rupees. Caught in CCTV.” 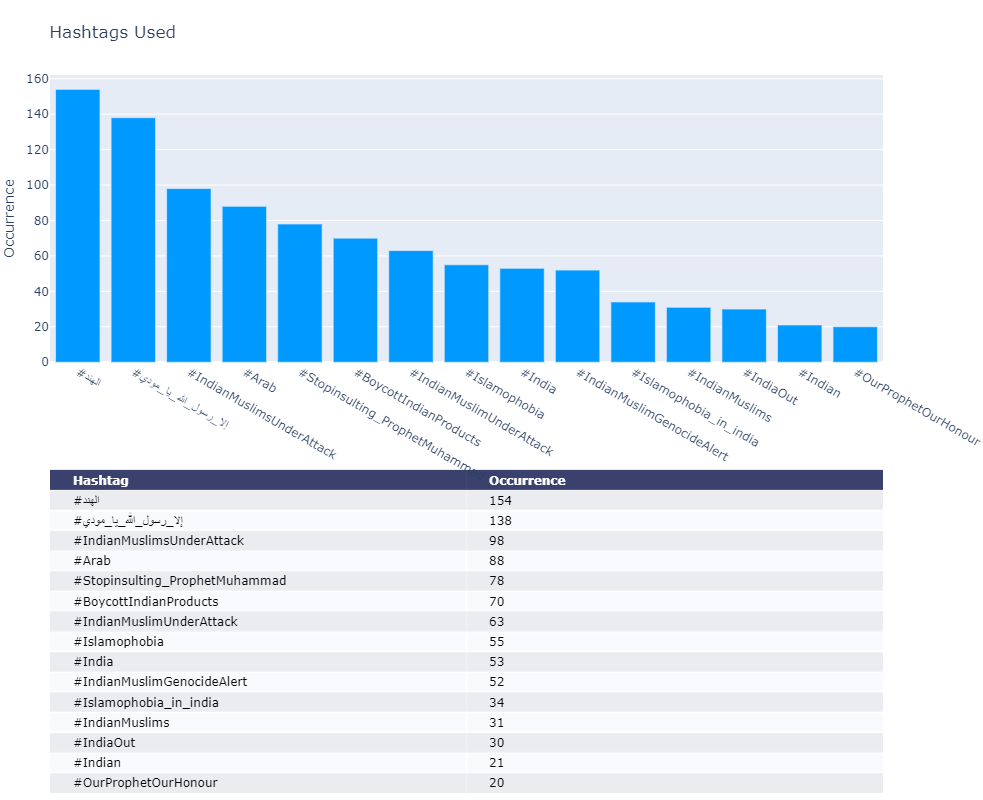 The graph above is depicting the hashtags which were mostly used by the account. Some of the top hashtags includes, #الهند with around 155 times, followed by #إلا_رسول_الله_يا_مودي with 138 times. #IndianMuslimsUnderAttack was also used around 100 times followed by #Arab with 88 times. 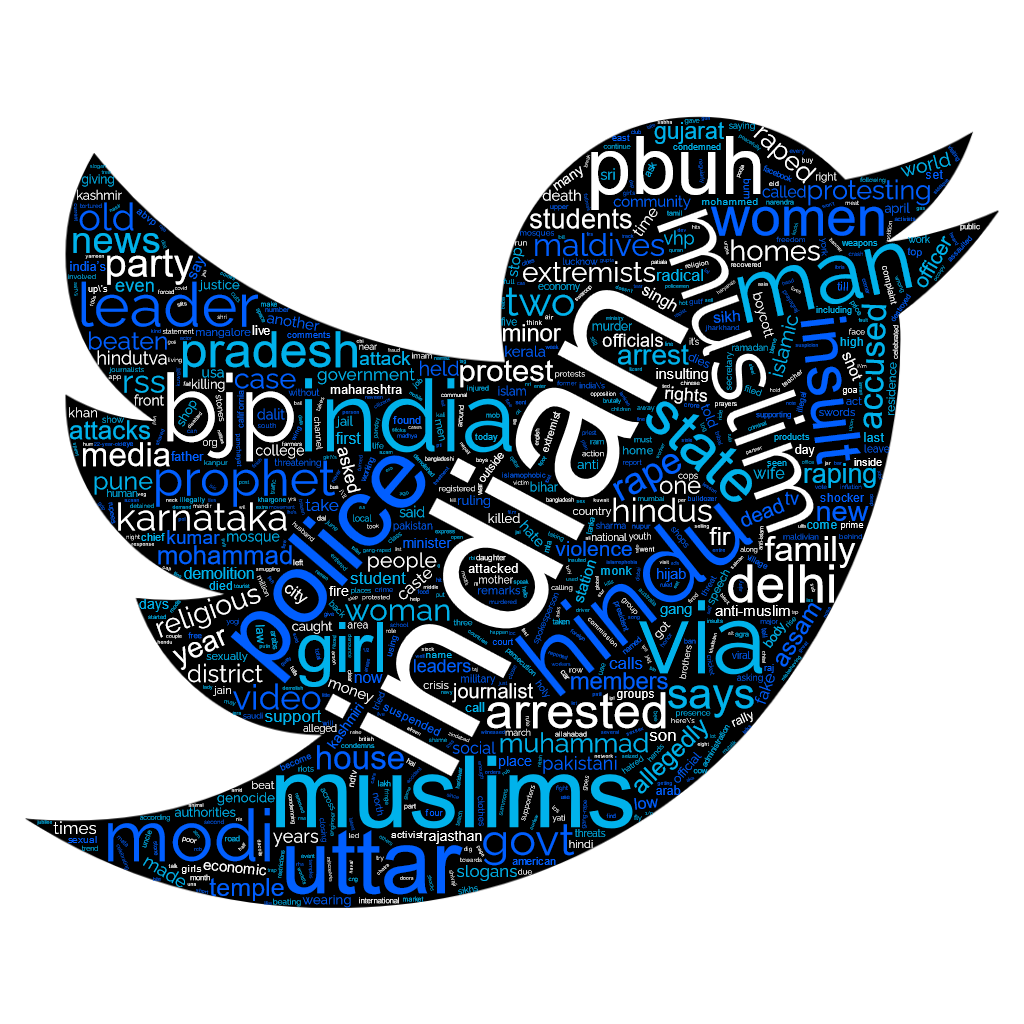 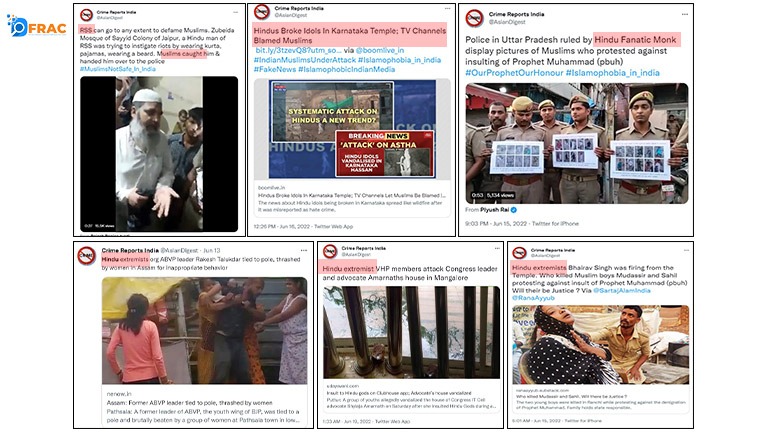 The account has used the word Hindu Extremist more that 56 times and the word more than 44 times.

Accounts that were mostly mentioned in the tweets by Crime Report India (@AsianDigest) includes @sajournal1 with majority of tags with around 315 times followed by tagging itself. @latestly, @indianexpress and @zoo_bear was also mentioned with high number of tags. 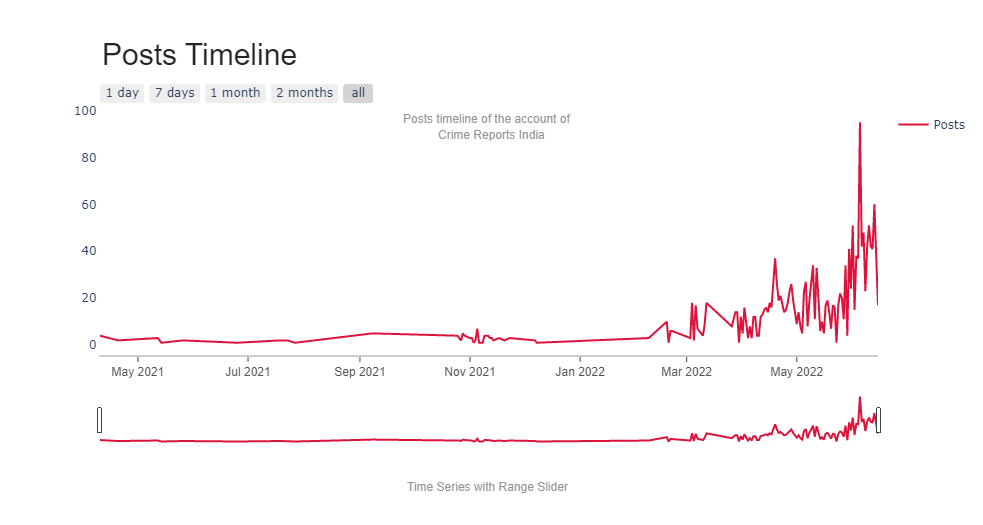 Crime Report India (@AsianDigest), was created in April 2021 but till May of 2022 this account was hardly posting anything in its accounts. Starting from 4th May 2022, this account’s engagement started increasing as seen in the graph above with highest number of posts done on 5th June 2022. 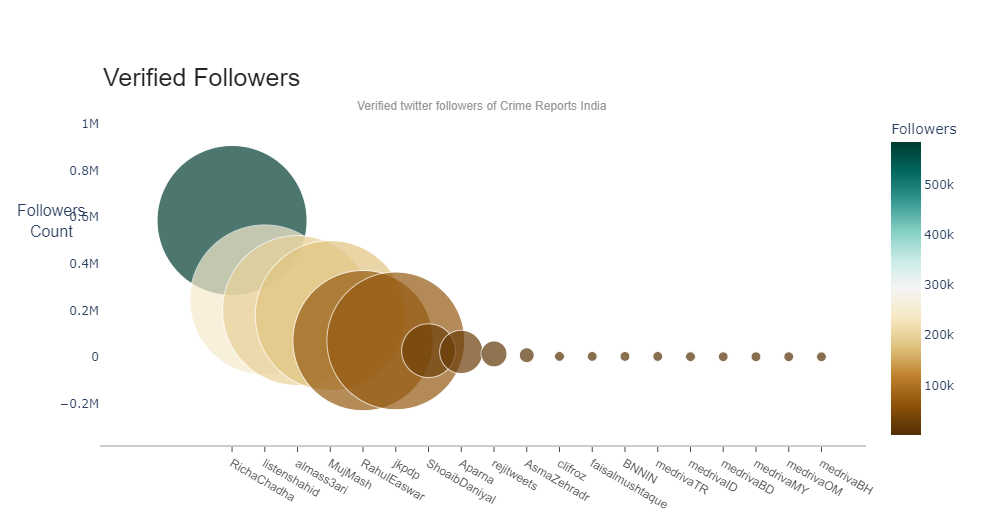 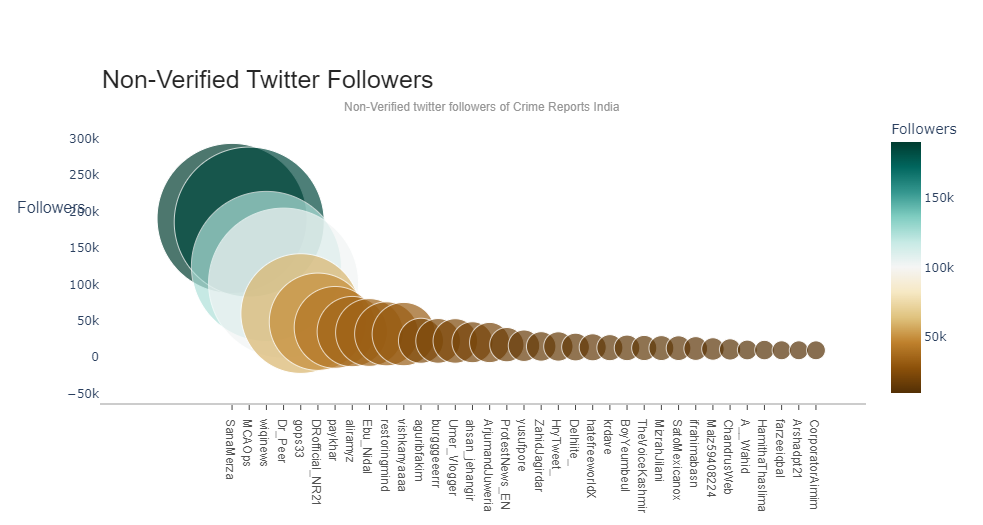 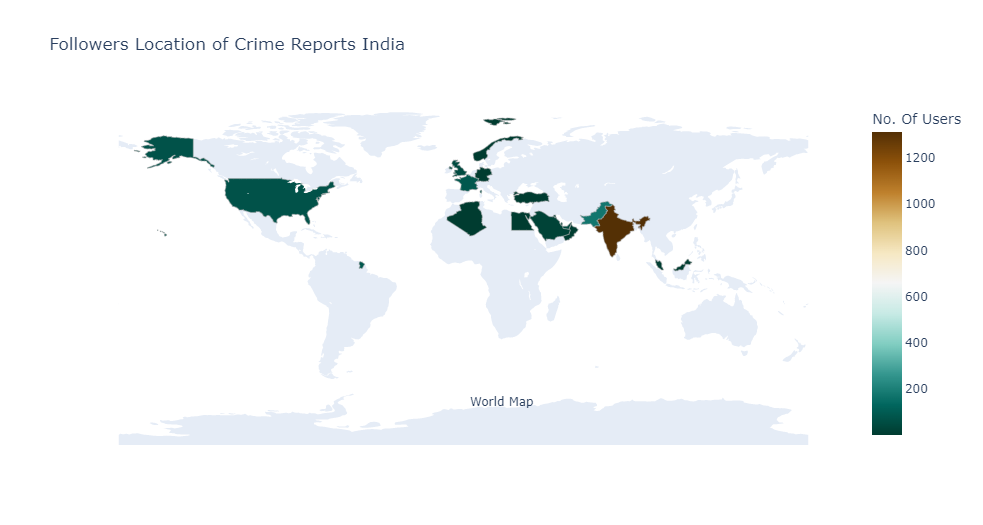 Above  is the location of followers of @AsianDigest. Out of 5,000 followers, around 1,300 followers are from India, followed by more than 175 followers from Pakistan. Moreover, 87 users are from France and 71 from USA. 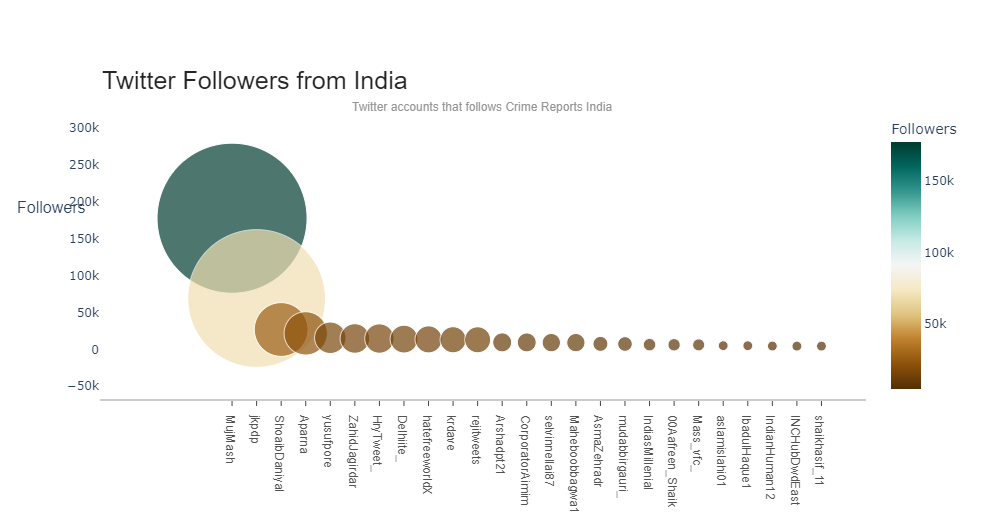 Hence, from this DFRAC exclusive report it can be concluded that the account named India Crime Reports on Twitter have shared many manipulated and hateful posts. Many of its claims are from uncredible sources and without any proper proofs. Sharing the links, it many times manipulates the news by giving them deceptive captions. This give the news different essence from the actual content of the news. Moreover, the account also driven from communal agenda.