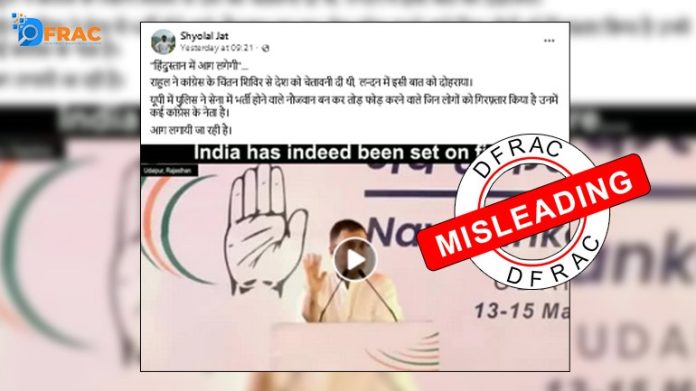 A video of Congress leader Rahul Gandhi is going viral on social media. In this video, Rahul Gandhi said- “Now this fight has started “. Is. You will see it in the future. There will be a fire in India. ,

Further, a Facebook user named Shyolal Jat wrote – “There will be fire in India”…
Rahul had warned the country from Congress’s Chintan Shivir, repeated the same thing in London.
In UP, many Congress leaders have been arrested by the police for sabotaging masquerading as youths recruiting in the army.
A fire is being set.” 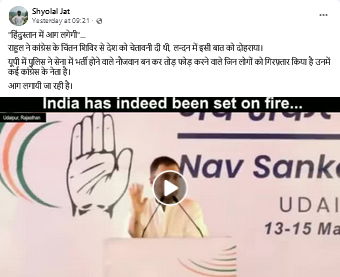 To check the video going viral, we reverse searched some of the frames of the video. On searching, we found this video uploaded on the official YouTube channel of Congress on 15 May 2022. This video is from Congress’s Chintan Shivir organized in Udaipur.

Between the 29:20 to 30:14 minutes of this video, Rahul is  saying – “ This is a fight for ideology. It’s not an easy fight. This is not even a political fight. This is a fight for the future of the country and a fight to save the country. And you will see, now this fight has started. In the coming time you will see, there will be fire in India. I spoke of Covid, remember. I’m telling the more they destroy the institutions, the more they suppress the conversations between our states, between religions, between castes, the more intense the fire will be. ,

This fact check of the viral video of Rahul Gandhi proves that his reference was to the activities happening inside the country. We also found a post of ANI on this matter.

Inflation will rise in near future. Unemployment, inflation, and attacks on India’s institutions are on the rise. 'Aag lagegi', we have to ensure they don’t set the country on fire: Congress leader Rahul Gandhi at Nav Sankalp Shivir in Udaipur pic.twitter.com/kKbdzUGfph

On the other hand, when we visited the profile of Shyolal Jat, we found that he has 34,500 followers. Fake and misleading news is continuously spread from his Facebook. He has posted a misleading video about the protest against Agnipath in Bihar. He wrote- ” When it comes to “Agniveers” walking on “Agnipath”. Why only such “Agniveer” comes in the mind first . ,

To check the reality of this video, when we reverse searched some frames of the video, we found that this video has been uploaded by Principle Of News on 28 January 2022 . This video is not about the protest against Agnipath, but about the rigging of recruitment in RRB-NTPC in Bihar.

At the same time, another misleading post has been made from this ID. Sharing the picture of Shivling in a hill situated between two mountains, Sheolal Jat wrote – “# wonderful , # unimaginable … he is # calm, # fierce , he is # beginning and # end too.. # Look at this # Shivling situated between two # hills in southern India, how hard our # ancestors have introduced us all to wonderful and great # architecture , and # so many wonderful and # wonder _ astonishing # wonders in the heritage Left for us #Har_Har_Mahadev ” _ _ _ _ _ 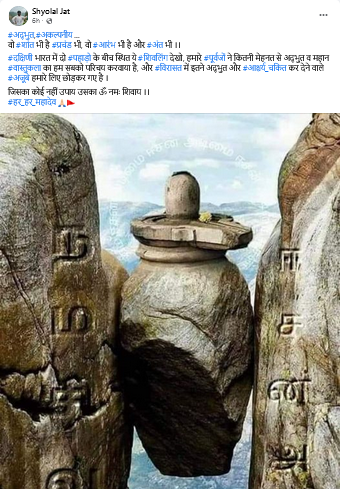 For the fact check of this photo, we did a reverse image search of the photo. During this time we found this photo on the website of pinterest.com . According to this website, this photo is from Norway.