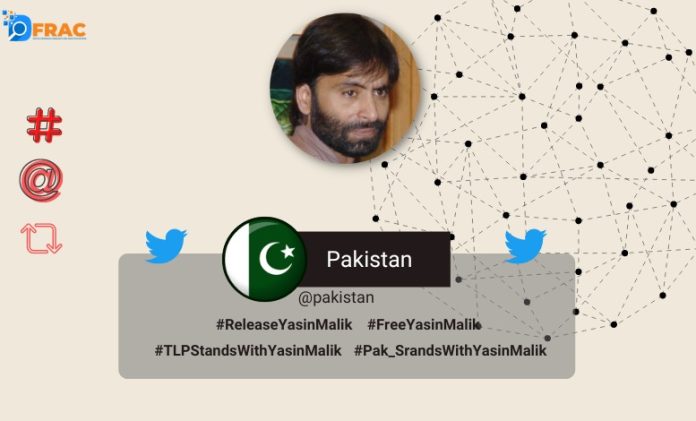 Jammu Kashmir Liberation Front ( JKLF) chairman Yasin Malik, a Kashmir separatist leader, was convicted by Delhi’s NIA court in terror funding cases on May 19 and sentenced to life imprisonment on May 25.

For years, stories of violence and bloodshed in Kashmir, an integral part of India make the headline. Many groups and people like Yasin Malik has a major role in bringing Kashmir, once called the paradise of the world, into this condition.

And, when the court declared Yasin Malik guilty, the hashtags almost reached to its peak. Some users losing consciousness in the zeal, were getting involved in “Gorakh Dhandbaazi.” Many pictures and videos of Yasin Malik were doing rounds on social media sites gone massively viral with false claims.

Both the government and the opposition of Pakistan have unanimously condemned the arrest of Yasin Malik. During this, Mushaal Malik, wife of Yasin Malik, was also very active in organizing press conferences and demonstrations. 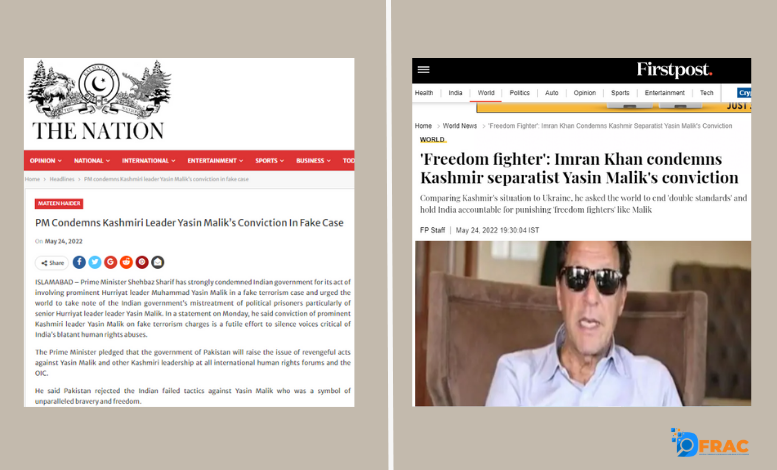 In a BBC interview, when the journalist said that there was a very slight reaction in Kashmir to the life sentence given to Yasin Malik , his wife Mushaal Malik claims that mild has not happened at all , very much has happened. People are giving an overwhelming response.

At the same time, many Pakistani users claimed that in connection with the release of Yasin Malik, a massive freedom march was organized in Srinagar, in which many people participated.

Sharing a picture picture where of a huge crowd, a user named Irfan Siddiqui wrote on Facebook , “#कश्मीरीयों_से_रिश्ता_क्या_ला_इलाह_इल्लल्लाह, You will stop only on TV channel but no one can stop it on social media, people’s crowd in Maqbooza (Indian Occupied) Kashmir, rallies taken out for the release of Yasin Malik Sahib”. 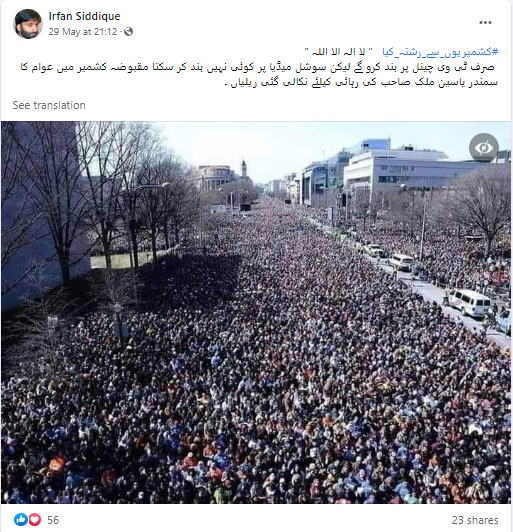 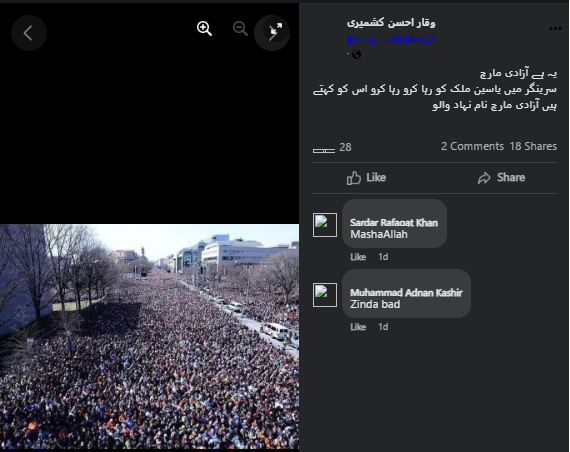 Sharing the same photo on Facebook, Umair Mahvish wrote , “TV channels will only stop the voice of Kashmiris but no one can stop it on social media Maqbooza (Indian Occupied) The Samudra of the people in Kashmir was taken out for the release of Yasin Malik Sahib. rallies ” 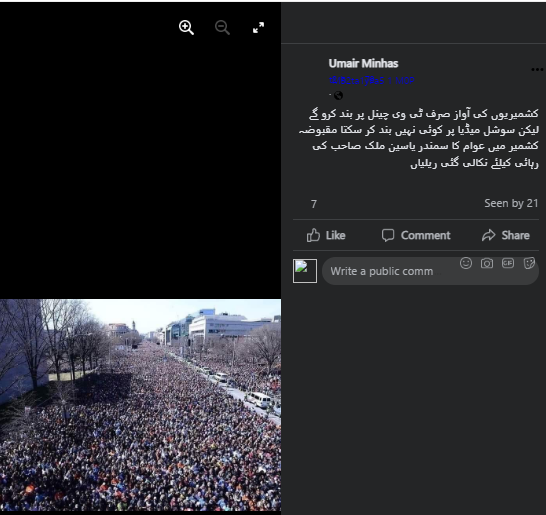 Similarly, many users on Twitter have also made the same claim about this picture.

Umaiza Ali captioned it , “ You can only stop the voice of Kashmiris on TV channels but no one can stop it on social media. Shared the same picture with “ Rallies taken out in support of the release of Yasin Malik Sahib, a sea of people in Maqbooza (Indian Occupied) Kashmir.” 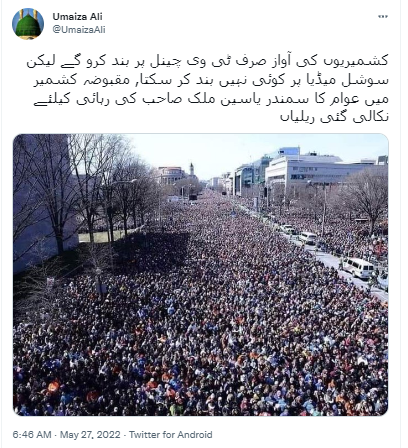 At the same time user named MansoorurRahman tweeted the same picture with the same caption. 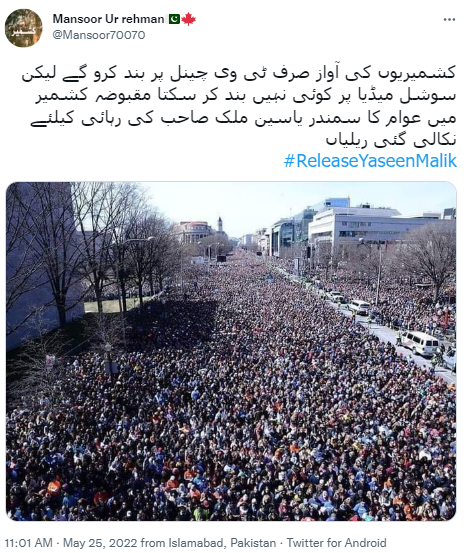 Fact check on image of the rally on Yasin Malik

DFRAC reverse image searched this image on the Internet and found that this image is of the 2018 Washington rally. Getty Images captioned it on their website on March 24 , 2018 ,” Celebrities joined in March for Our Lives in Washington , DC . 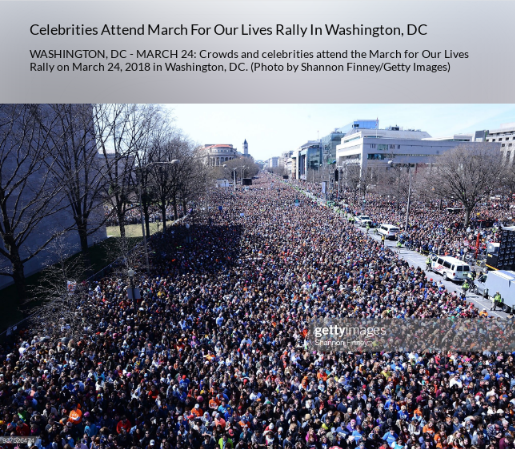 Many media houses had covered this march of Washington.

The viral claim about Yasin Malik is baseless and misleading, as the image is of the freedom march was organized in Srinagar is of America, which was captured in 2018.

On the our analysis, we found that the above hashtags mostly started from 22 May 2022 . Later, these hashtags were trending on Twitter with over 40,000 tweets and 4,300 tweet replies on May 25 . 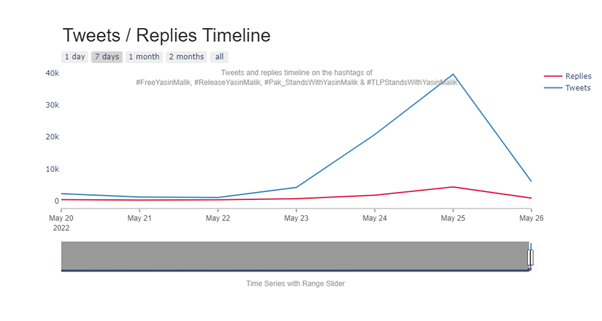 Below are those account that had tweeted or mentioned about Yasin Malik. @MushaalMullick tops the list, followed by @UN, @UNHumanRights , @ ImranKhanPTI , @PMOIndia , etc. 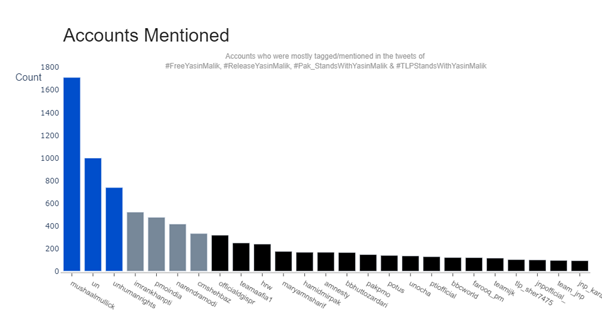 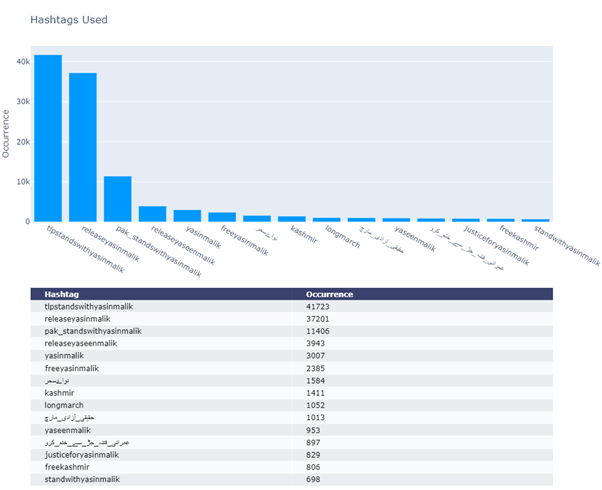 Users Interacted the most

Below the graph shows that the most users tweeting on Yasin Malik’s hashtag. @Lover19Tlp tops the list with nearly 1,400 tweets , followed by @Numan670 with over 900 tweets . Tehreek-e-Labbaik Pakistan supporter @kasanagujjar078 is on number three with more than 570 tweets followed by @Mr___ ZaHiD with 365 tweets on the hashtag. 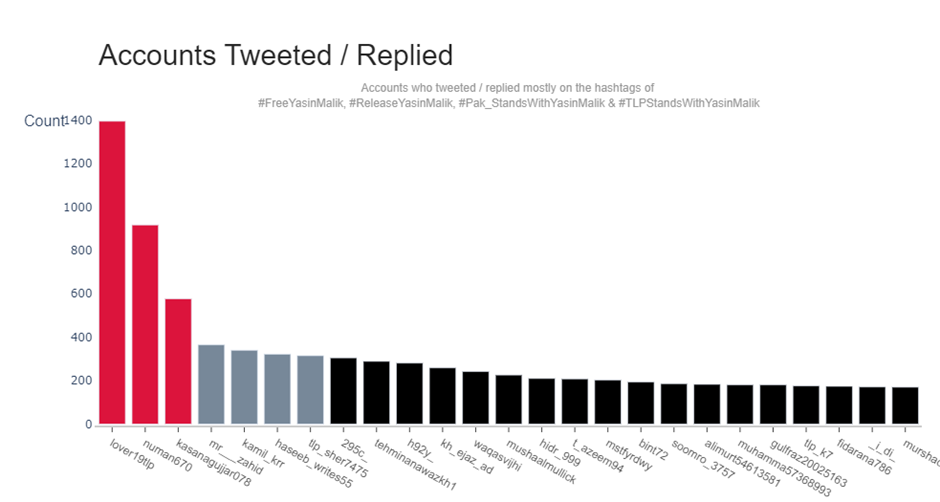 Analyzing over 22,000 users who have interacted with all the hashtags. We found that users’ account creations increased over time. Creation Timeline is given below. 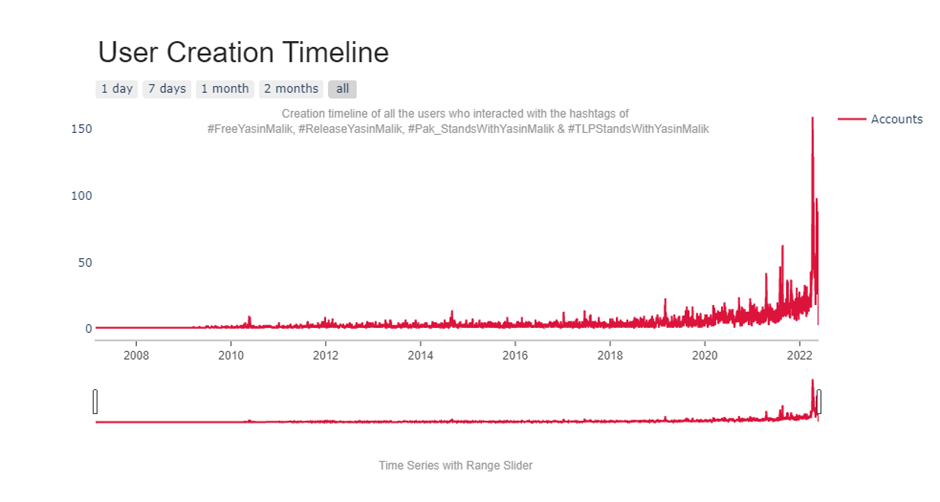 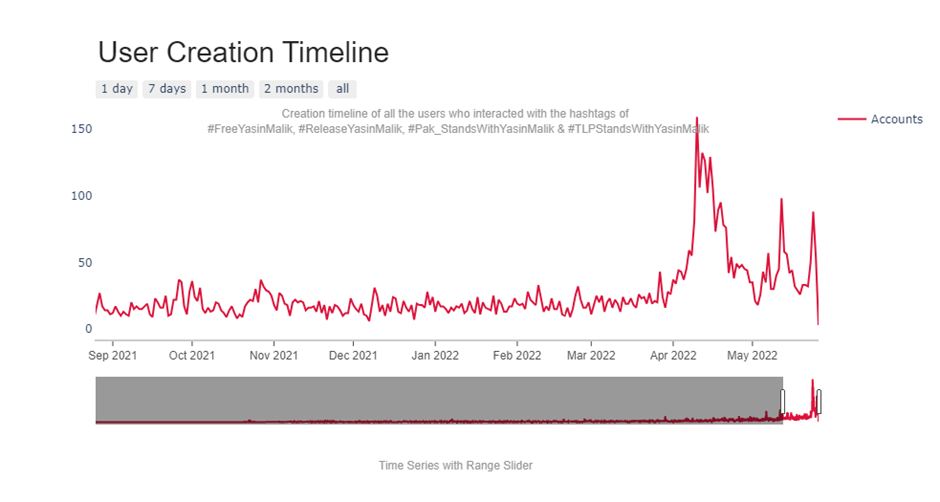 And tweeted a photo with it. The caption of this picture it is written in Urdu which can be nearly translated into English that, “Complete strike in Maqbooza (India Occupied) Kashmir against the punishment of Yasin Malik ” . 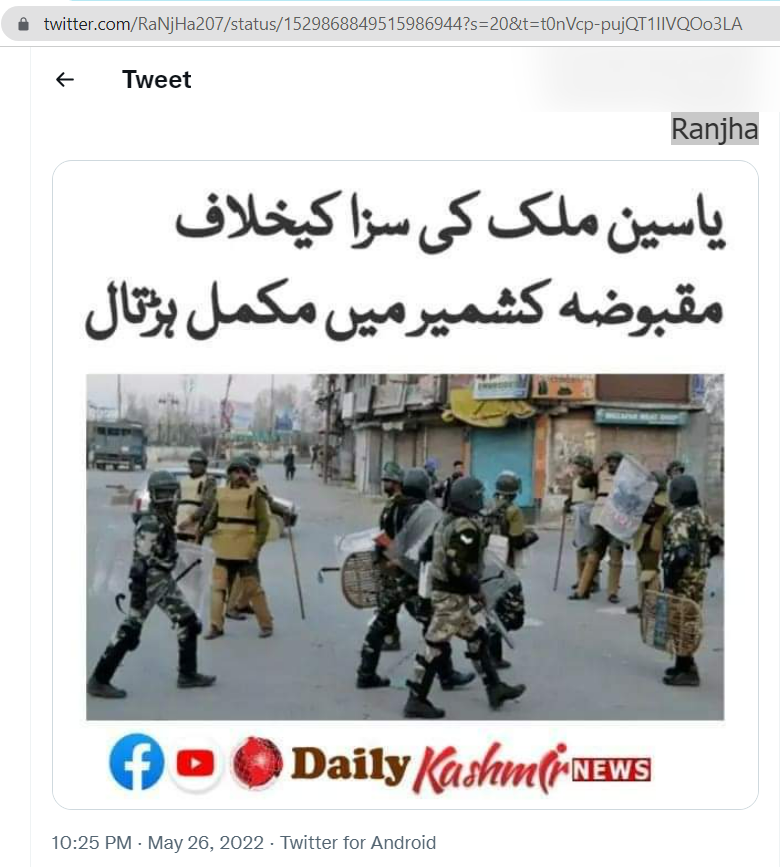 To know the reality of this photo, we did a reverse search image on the internet and we found that this photo has been taken from a video of YouTube channel Quick News on June 11 , 2020.

DFRAC found that no bandh was announced by any organization after the court sentenced Yasin Malik. .

Etv Bharat has published a report in Urdu on 26 May 2020. According to which shops and business establishments remained closed in some parts of Srinagar and especially in Maisma, the native area of Yasin Malik, but government offices and schools remained open . This may be called a partial strike.

According to the report, no one was being stopped. Yes , keeping in mind the situation, inspection was being done from time to time. 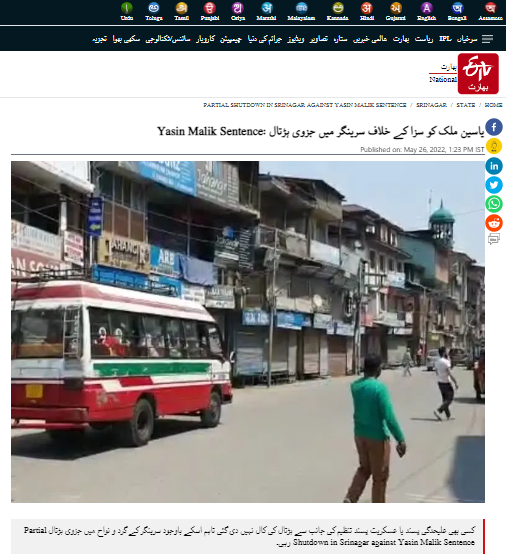 10 or 15 people had gathered in front of Yasin Malik’s house and made a symbolic demonstration.

On the other hand, Kashmir-e-Uzma (The Greater Kashmir) has reported that the protesters have been arrested. 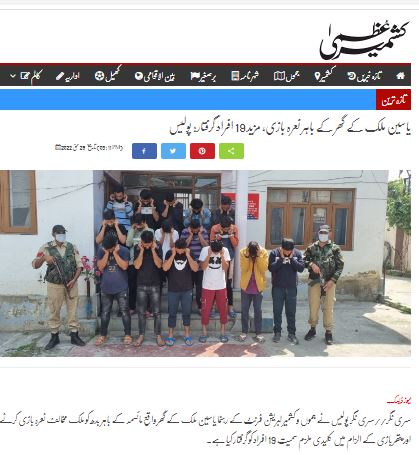 In such a situation, it is very important to the location of these Twitter accounts.

Most of the accounts interacting with these hashtags are from Pakistan.  We found that out of 11,000 users, more than 8,100 users were from Pakistan. Then followed by India with 1,000 users , United Arab Emirates (UAE) with 238 and UK (England) with 222 . Notably, most of the users from India were from Kashmir. 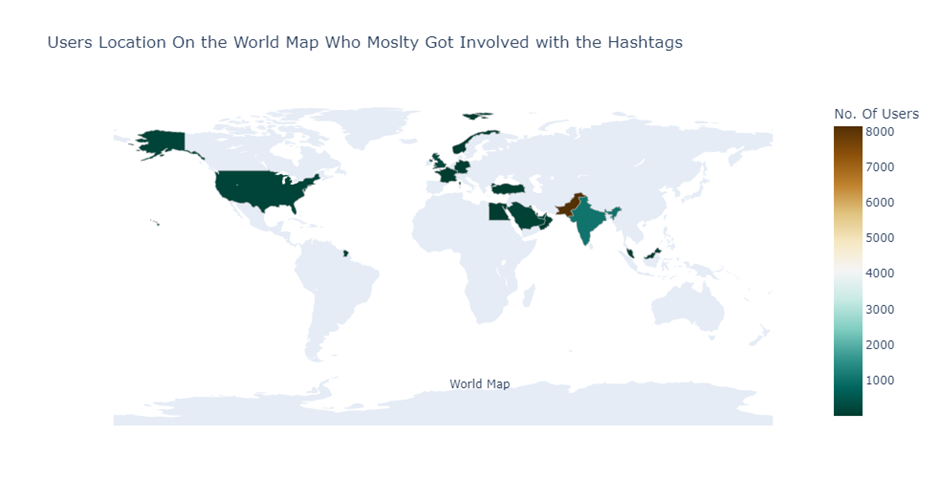 Below are the top 25 verified accounts which tweeted the hashtag. Mostl of the accounts were from Pakistan. Some of the top accounts are @AnsarAAbbasi , @ChMSarwar , @NazBaloch_ , @GFarooqi , @AndleebAbbas , @SirajOfficial etc. 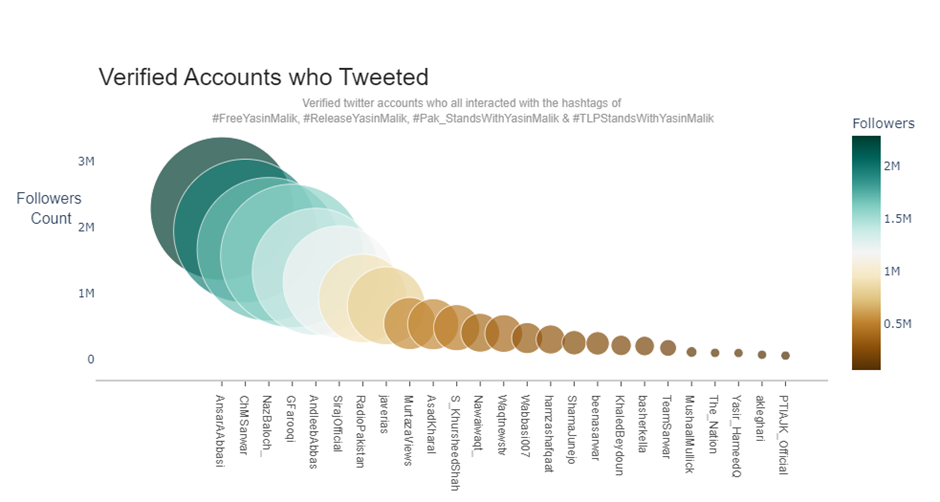 Shahid Afridi wrote on Twitter , “India’s continued attempts to silence critical voices against its blatant human right abuses are futile. Fabricated charges against #YasinMalik will not put a hold to #Kashmir‘s struggle to freedom. Urging the #UN to take notice of unfair & illegal trails against Kashmir leaders.”

India's continued attempts to silence critical voices against its blatant human right abuses are futile. Fabricated charges against #YasinMalik will not put a hold to #Kashmir's struggle to freedom. Urging the #UN to take notice of unfair & illegal trails against Kashmir leaders. pic.twitter.com/EEJV5jyzmN

On the other hand, the trial of Yasin Malik has been done as per law , and if found guilty, the court sentenced him to life imprisonment.

Let us tell our readers that Yasin Malik was facing serious charges like waging war against the country , criminal conspiracy and involvement in illegal activities. 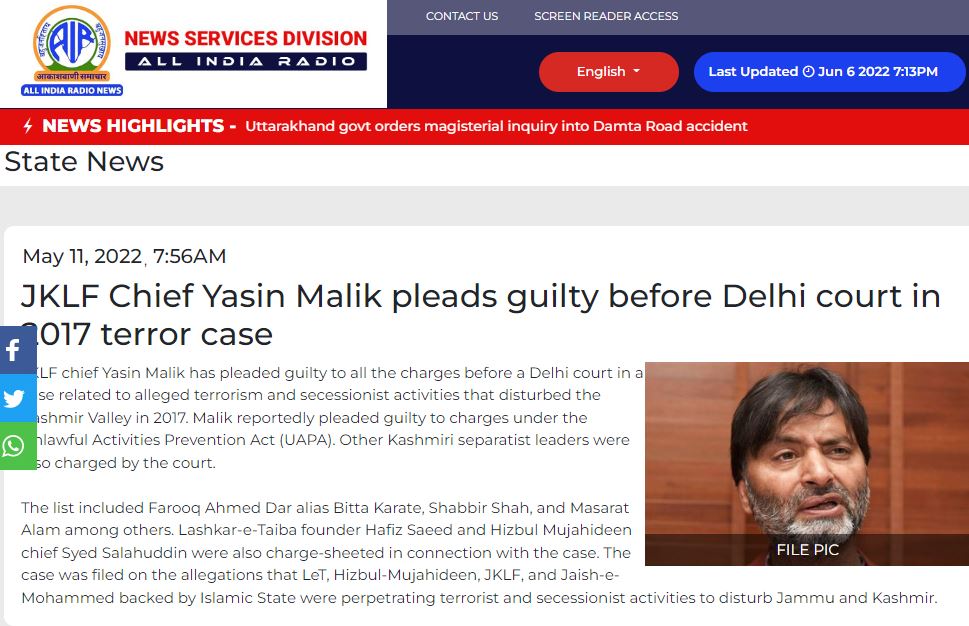 At the same time, Indian cricketer Amit Mishra wrote in retweet , “Dear @safridiofficial he himself has pleaded guilty in court on record. Not everything is misleading like your birthdate.”

Dear @safridiofficial he himself has pleaded guilty in court on record. Not everything is misleading like your birthdate. 🇮🇳🙏https://t.co/eSnFLiEd0z 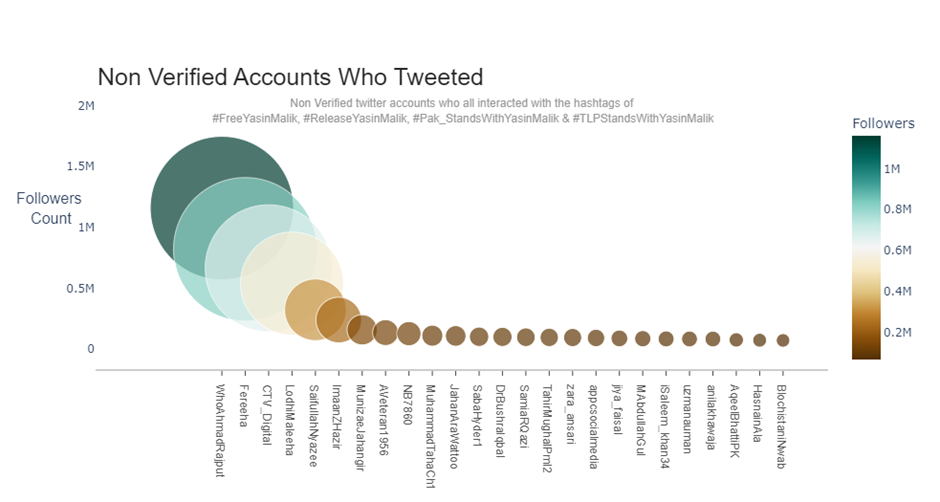 Women’s Wing of Jamaat-e- Islami Pakistan also tweeted along with the hashtag of #freeYasinMal #Pak_StandsWithYasinMalik.

In a tweet Jamaat Women Secretary General Dardana Siddiqui claimed that Yasin Malik was innocent , and demanded that he be a proven terrorist. Kulbhushan should be hanged.

In another tweet, it has been said that the Indian court face also got exposed. 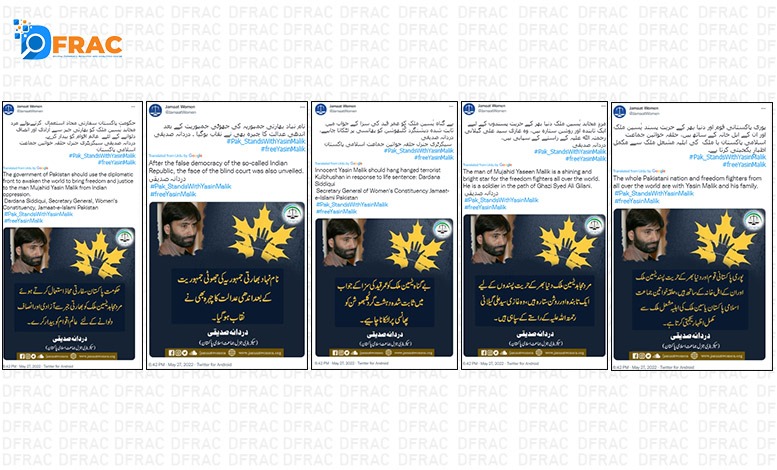 Yasin Malik has been convicted by the court after regular trial.

Kulbhushan Jadhav was born in 1970 in Sangli, Maharashtra. He is a retired Navy officer and had business in Iran.

The Government of India challenged the death sentence awarded to Kulbhushan by the Pakistan Military Court in the International Court of Justice (ICJ) where India won. And the ICJ had stayed the sentence of Kulbhushan. 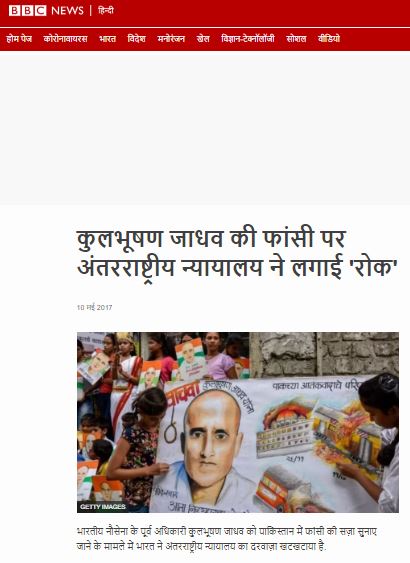 Accounts that Tweeted with the hashtag 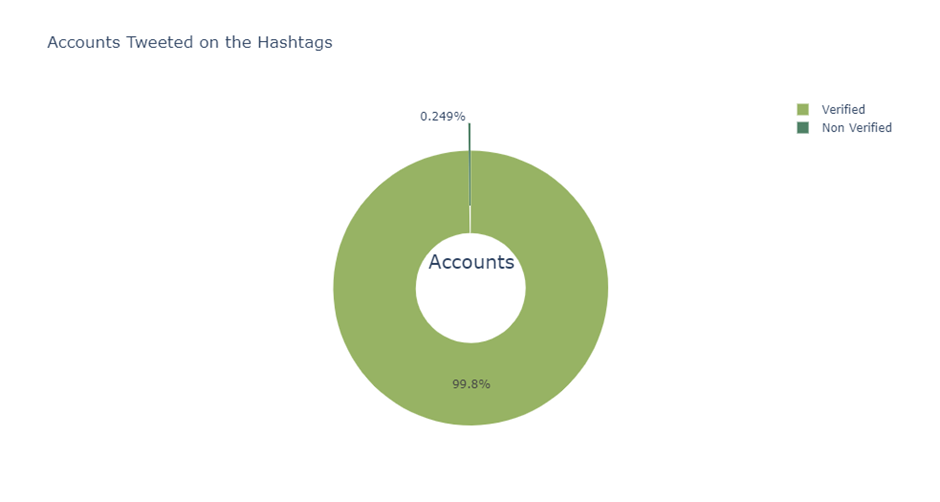 During hashtags analysis, the #DFRAC team found that wildly false and misleading content was used by the users.

A music video is going viral on social media sites with the claim that...
Fact Check

A video is getting viral on social media sites. In the video, a boy...