Fact Check: Did Indian Oil issue a warning to not fill the fuel in the tanks to its maximum limit? 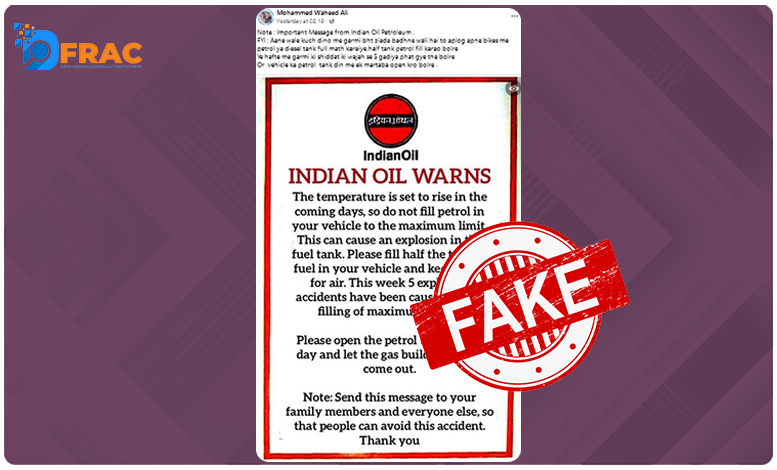 A picture was all over the internet which is claimed to be a warning from a fuel company Indian Oil.

FYI: The heat is going to increase a lot in the coming few days, so do the math on your bikes with petrol or diesel tank full. Fill half tank petrol in this week, due to the intensity of the heat, 5 vehicles were torn apart or open the petrol tank of the vehicle once a day.” 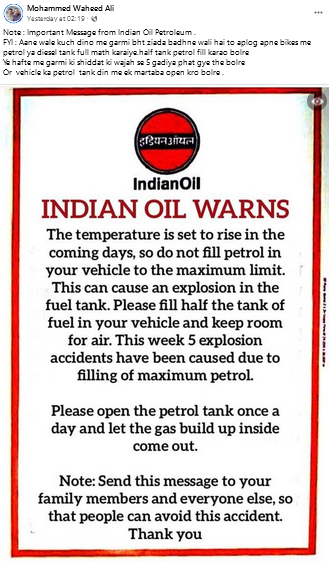 Many images with warnings are shared on Twitter so that other people take caution from it.

While only looking at the viral picture one can tell it as a edited picture.

We still reverse searched to check the authenticity of the picture and found no such picture on the official Twitter account of Indian oil.

But, as the picture was widely circulated Indian oil told the consumer not to believe in any such news.

It tweeted, “There are rumours in social media that Indian Oil has given a warning to the following effect: Due to increase in temperature please don’t fill petrol to the maximum limit of the tank; it will cause an explosion in the fuel tank. If you want petrol, fill the half tank and leave the rest for air. IndianOil would like to disown this statement and clarify it as follows.”

“Automobile manufacturers design their vehicles considering all aspects of performance requirements, claims, and ambient conditions with built-in safety factors. The maximum volume specified in the fuel tank for petrol/diesel vehicles is no exception. It is therefore perfectly safe to fill the fuel in vehicles up to the full limit (max.) as specified by the manufacturer irrespective of winter or summer.”

Important announcement from #IndianOil. It is perfectly safe to fill fuel in vehicles up to the limit(max) as specified by the manufacturer irrespective of winter or summer. pic.twitter.com/uwQFDtjTdi

No such warning was issued by the official Indian oil account.

Claim Review: Indian Oil issued a warning to not fill the fuel in the tanks to its maximum limit?

Previous articleFact Check: Has BCCI Announced A New Mixed Cap For The Best All-Rounder Of IPL?
Next articleFact check:  Did people ignore Biden after the appearance of Obama in the white house?