Fact Check: Did Jayant Singh Chaudhary give the statement of holding no responsibility towards the Jaat Community? 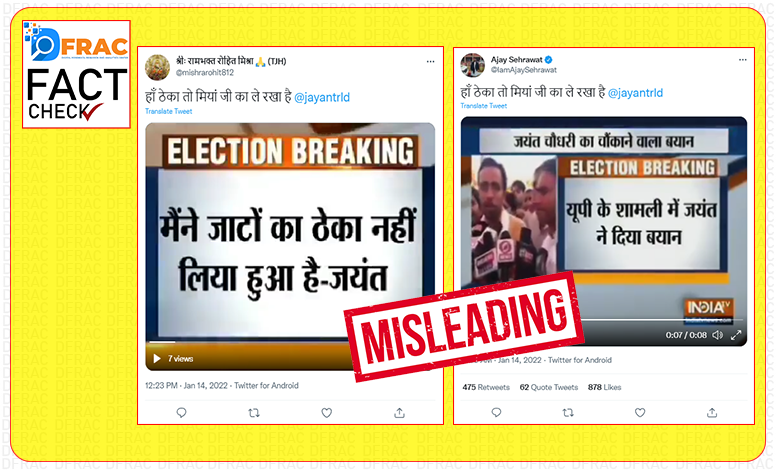 Having half information can give the sight of misleads? Yes, it can we have a video that is getting viral on social media platforms. The video is of Jayant Singh Chaudhary Chief of RLD, Rashtriya Lok Dal. In the video, Jayant Singh has been captured giving a statement about how he does not care about Jaats and he holds no responsibility towards them even after coming from the Jaat hereditary. Many users got offended by his statement and showed their aggression on social media!

Users gave it an angle where Mr. Chadhaury was not supporting the Jaat community but Muslims as the caption of Ajay Sehrawat states, “हाँ ठेका तो मियां जी का ले रखा है @jayantrld”.

After digging deep into the story, we got the whole video which was covered by IndiaTv in March 2019. Only if one will see the whole video would get to know what Jayant Singh actually meant. Jayant Singh Chaudhary did say that he holds no responsibility towards Jaat as he is more concerned for the farmers of India. Users only recorded and posted one part of his statement. The other one describes his meaning clearly. Jayant Singh Chaudhary gave this statement in the time when he has fighting elections from the side of Mayawati and Akhilesh Yadav back in 2019 at Shamli.

Conclusion: The claims are misleading

Previous articleFact check: Did Mohan Bhagwat and Asaduddin Owaisi make an alliance?
Next articleFact Check: Did the Pakistani drone kill two Indians in a drone attack?