EXCLUSIVE Report: Analysis Of Communalism Spread On Social Media On The Arrest Of Kalicharan Maharaj 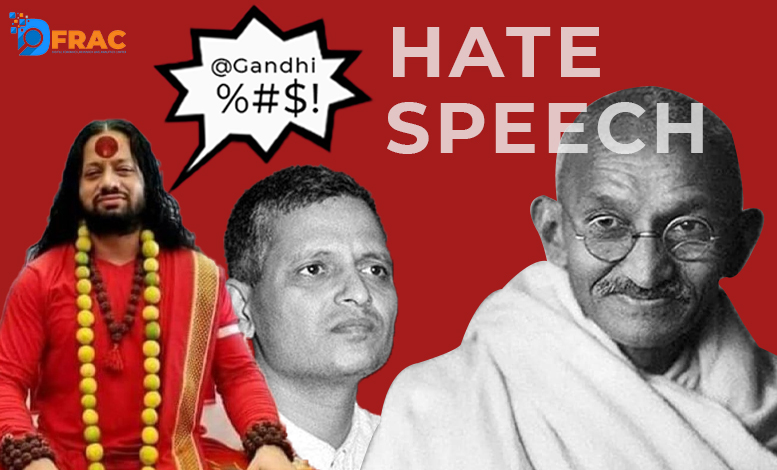 Criticizing Kalicharan, users on social media started demanding his arrest. People appealed to Chhattisgarh Chief Minister Bhupesh Baghel to take action in this matter. After catching the heat of this entire controversy, Chhattisgarh Police registered a case against Kalicharan under various sections and started raids for arrest. On Thursday, the police arrested Kalicharan from Khajuraho in Madhya Pradesh.

After the arrest of Kalicharan by the Chhattisgarh Police, once again a controversy started on social media. Social media users associated with right-wing ideology protested the arrest of Kalicharan, demanding his release. During this, these users ran many hashtags. The most prominent hashtag was #ReleaseKalicharanMaharaj, which was trending top on Twitter. Many verified users made several consecutive posts to make this tweeter trend.

Many users resorted to hate during this time and tried to give a Hindu-Muslim angle on this issue as well. In this analysis, we will examine and analyze all the agenda, propaganda, and misleading facts on social media regarding Kalicharan.

Many users on social media are opposing the arrest of Kalicharan, calling it a violation of “Freedom of Speech”. Many users wrote that the Indian Constitution gives freedom to all citizens to express their views. Kalicharan Maharaj also has the freedom to express his views. Therefore, constitutional and legal rights should not be selective but should be the same for all.

The constitution guarantees freedom of speech for all including #KalicharanMaharaj. The law can't be selective. It should be the same for all.#ReleaseKalicharanMaharaj pic.twitter.com/hrKavRssdm

A user named Anirban Niyogi posted on social media justifying the assassination of Mahatma Gandhi using the hashtag #ReleaseKalicharanMaharaj. He shared a poster claiming that it was very important to kill Gandhi. He wrote in this poster that – “Gandhi’s killing was very important. There was a plan of a 20 km wide route from West Pakistan to East Pakistan (Bangladesh). Nathuram  assassinated Gandhi before he was going to Pakistan in 1948 to complete the work of this plan. Gandhiji was going to fragment the country. Congress leaders have hidden a lot from the people of the country. Nathuram Godse saves the country from fragmentation.” 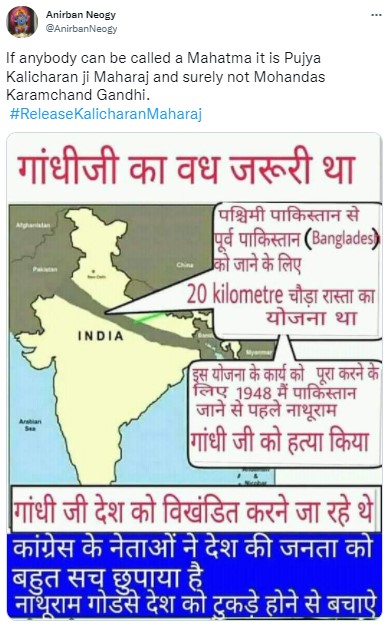 To know the truth of this claim, we did some keyword searches on Google. After which we got a fact check of DW News. According to this fact check, Mohammad Ali Jinnah had said in response to a question of a journalist of the news agency Reuters on May 22, 1947, about giving a corridor for East Pakistan and West Pakistan.

In June 1947, the British government urged Indians to show a big heart and give a corridor to Pakistan. Which was strongly opposed by Chakravarti Rajagopalachari on behalf of the Congress. At the same time, Nehru also rejected this demand of Jinnah outright. Apart from this, Mahatma Gandhi was nowhere in this entire conversation, nor did he ever make any statement about this corridor.

Here is a word cloud of words used by social media users on Twitter. Which shows the most often used words in tweets. These were mostly “Kalicharan Maharaj”, “Maulana Saad”, “Freedom of Expression”, “Release Maharaj”, “Gandhi”, “Demand Release” etc. 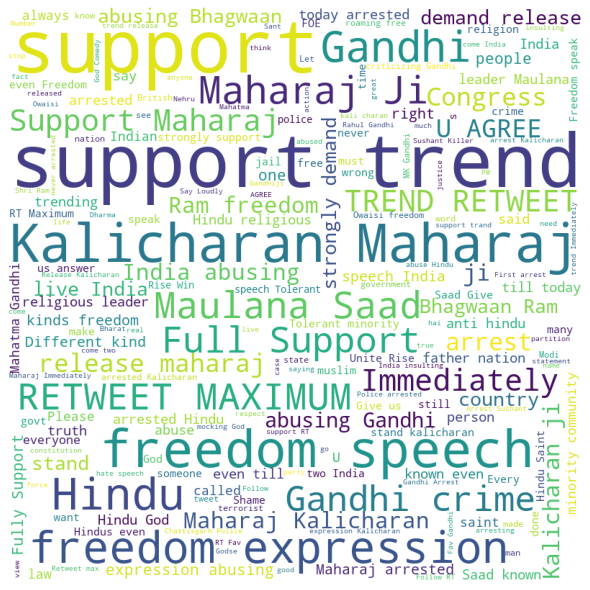 The bar graph below shows who the users were, who were tagged or mentioned in most of the tweets. Chhattisgarh CM @bhupeshbaghel was tagged the most in over 300 tweets. After this @TheDeepak2020In and @YogiDevnath2 were tagged around 250 and 225 times.

Users who started the hashtag

After the arrest of Kalicharan Maharaj, a campaign was launched on social media for his release. The campaign was first started by Chhattisgarh’s BJP MLA Brijmohan Agarwal. Journalist and columnist Adesh Rawat (@AadeshRawal) tweeted- “BJP MLA from Chhattisgarh Brijmohan Agarwal has used a hashtag to get Kalicharan free. These MLAs are the same ones who laughed at Atal Ji’s ashes. Therefore, it will be difficult to forgive them too !!”

We did some keyword searches on Google to check the veracity of Aadesh Rawat’s claims, and we found a DNA report. According to this report, Brijmohan was laughing at Agarwal in the tribute meeting of former Prime Minister Atal Bihari Vajpayee. Our readers can read the report by clicking on the link below.

@scn_subhash has tweeted over 270 times on this hashtag, followed by @ashishk612 and @waghela_vasant over 220 and 152 times respectively. Apart from this, a user named Sudhakar Singh Rajput (@SudhakarSinghS2) used the hashtag #ReleaseKalicharanMaharaj to claim that he has made more than 500 tweets and retweets and he will tweet and retweet 500 more. However, the same hashtag was used by him on posts on other topics. 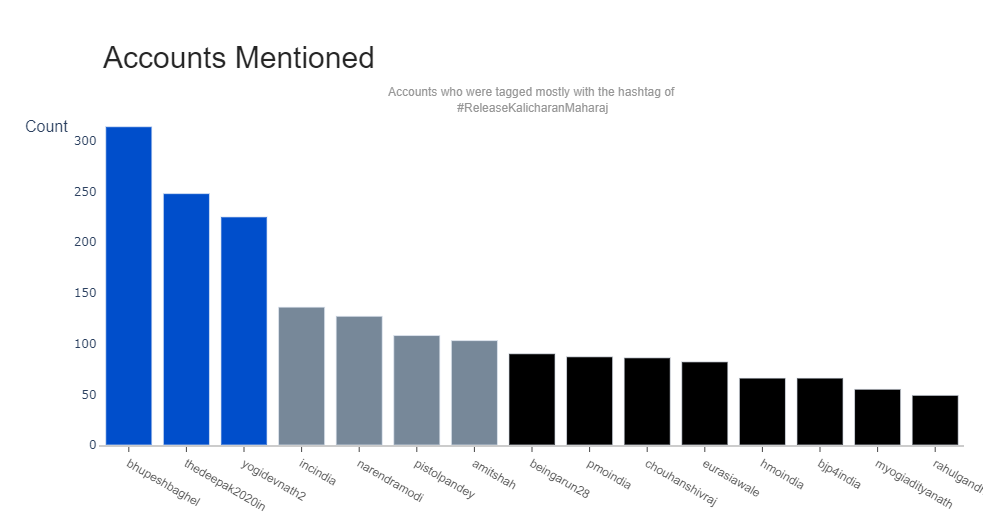 @scn_subhash has tweeted over 270 times on this hashtag, followed by @ashishk612 and @waghela_vasant over 220 and 152 times respectively. Apart from this, a user named Sudhakar Singh Rajput (@SudhakarSinghS2) used the hashtag #ReleaseKalicharanMaharaj to claim that he has made more than 500 tweets and retweets. Further, he will tweet and retweet 500 more. 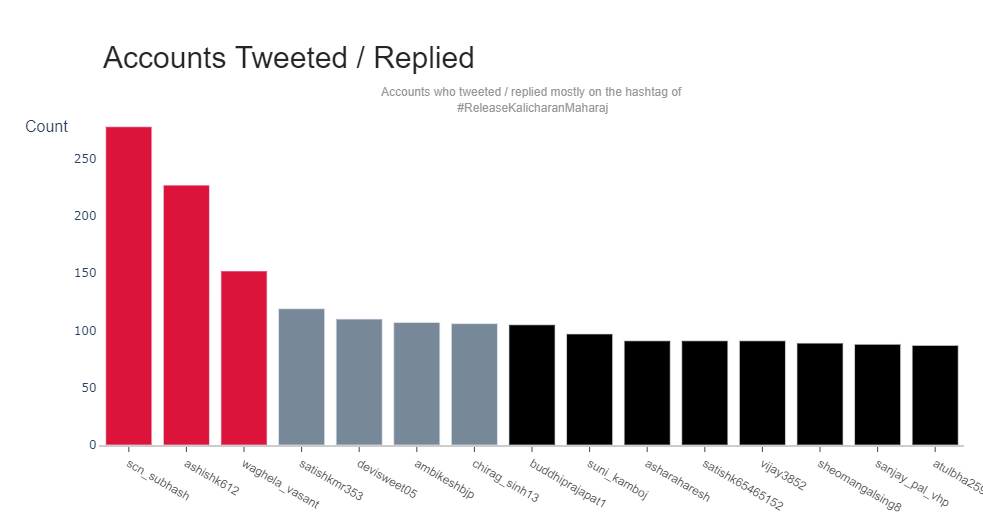 An analysis of hashtags and posts in support of Kalicharan Maharaj on social media shows that right-wing ideologues propagated and propagated fake news and false facts during this period. During this, they used fake news to justify the assassination of Mahatma Gandhi, and also distorted the history. Moreover, our analysis, we found one more thing that on this matter. Along with using all the dirty tricks to fulfil their agenda full of hate, they made all the attempt to spread hatred in the name of Hindu-Muslim.

That is to say, people made many misleading claims on Maulana Saad, comedian Munawar Farooqui and Shahi Imam of Delhi’s Jama Masjid, Ahmad Bukhari. Furthermore, these people full of hate made every effort to give a Hindu-Muslim angle to this matter.