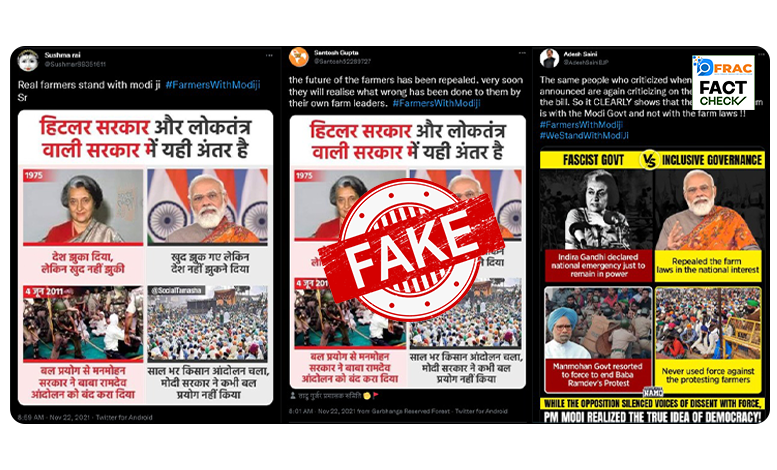 After the 3 contentious farm laws were repealed, the people who participated in the year long protest celebrated that their hard work was successful. The farmer’s protest is known to be vehemently opposed to the policy. However, a seemingly odd hashtag began to go viral on Twitter. The hashtag labelled #FarmersWithModiji showed a completely different face of the farmers almost as if it was entirely fake.

Within the hashtag, users claimed that Modi only wanted the benefit of the farmers but rather than staying true to himself unlike Indira Gandhi, he bowed down for the country’s sake. The hashtag also contained statements in support of the farm bills which is highly unusual.

One of the claims here was that the Modi government never used force against the farmers during their year long protest as opposed to the Manmohan Singh government who shut down Baba Ramdev’s protest.

The same people who criticized when the bill was announced are again criticizing on the withdrawal of the bill. So it CLEARLY shows that their actual problem is with the Modi Govt and not with the farm laws !!#FarmersWithModiji #WeStandWithModiJi pic.twitter.com/UKaUmALXAE

the future of the farmers has been repealed. very soon they will realise what wrong has been done to them by their own farm leaders. #FarmersWithModiji pic.twitter.com/j5ztUMoEb6

This claim is an outrightly false. We found numerous videos and reports of the farmer’s protest getting violent and the police lathi-charging on elderly farmer

There is also a video of Karnal’s District Magistrate instructing the police to “bash the farmers’ heads in”.

HEAR Karnal’s DM saying it to his boys that they can break the heads as there are orders from the top to teach lesson to farmers.#FarmersProtest
#किसान_विरोधी_खट्टर pic.twitter.com/xsV1fseNH6