Fact-Check: Video of counterfeit Indian currency printing in Pakistan is misleading and fake 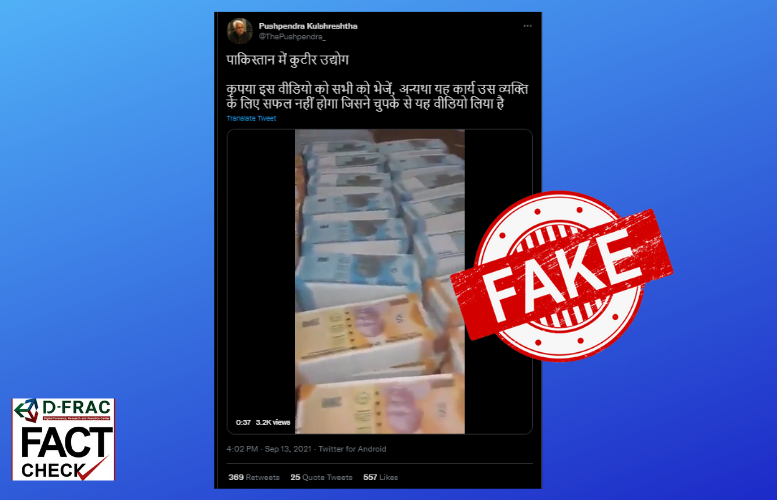 On September 13,2021 , a twitter account by the name of @ThePushpendra_  posted a video of what looks like a man printing Indian currency notes in a bootleg facility. The man can be seen printing notes of all different denominations.

It must be noted that the account seems to be a fake account of the journalist Pushpendra Kulshrestha with a whopping 4,00,000 followers on Twitter. The account regularly posts contentious tweets that are communal in nature.

The video itself is captioned ,”Cottage industries in Pakistan. Please send this video to everyone else. This task will not be successful for the person who secretly took this video”.

The video is rapidly gaining views currently standing at 3.5k views. The video has also been posted over and over again by other users on Twitter with a similar claim. The video was also posted on Facebook as seen here.

Firstly ,we got a closer look at some of the frames of the video to see what was actually written on the notes and it turns out, the notes were printed with the line ,”Children Bank of India ” which was the first indication of this being a false claim.

Secondly, we also performed a key frame and word search on google which led us to 2 India Today articles that covered this event that took place in 2018 and not 2021.

According to the article, the notes went into circulation in various parts of the country but were first identified in Delhi’s Sangam Vihar. The news report also confirms the arrest of the individual who took part in this prank.  Additionally, the National Crime Investigation Bureau of India also posted this video in 2018.

Therefore, the claim made by this account is not only false but also tries to create a sense of urgency and panic within their followers to spread this misinformation.