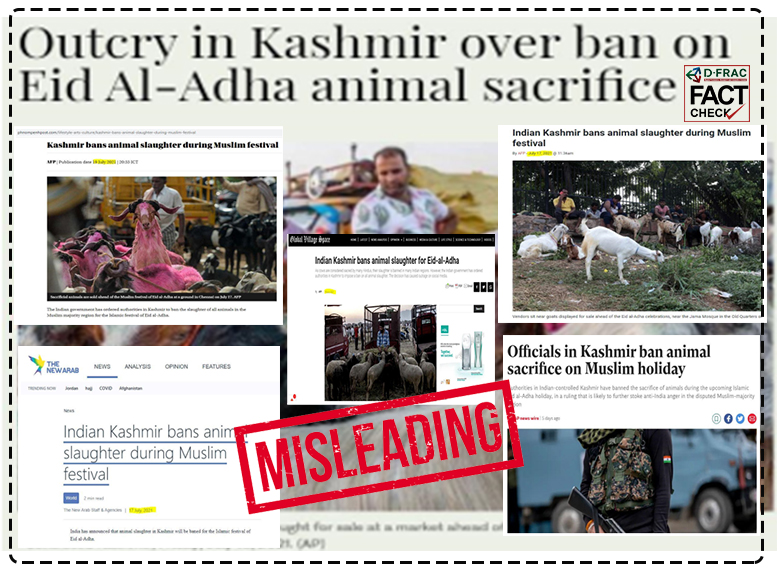 It is becoming increasingly difficult to trust even the most reputable news media outlets online. Misinformation seems to be the order of the day.

News outlets are something on which we depend on our daily news to know what is happening in this world and our country. If even these credible outlets start spreading fake news then which platform will we trust for authentic news?

“Kashmir and minorities” continue to be a contentious issue in India and through this fact check we will demonstrate how this issue was used by foreign media outlets to spread misinformation and disharmony in the country. The news outlets listed below published pieces titled “Ban on Animal Slaughter during Indian Kashmir Muslim Festival”, on the day the administration has already clarified that “There is no ban on animal slaughter on Eid”.

The news spread by news outlets stemmed from a letter issued by the Animal Welfare Board of India, Ministry of Fisheries, Animal Husbandry and Dairying which is a normal practice to take steps against illegal killing. There was no ban on sacrifice on the eve of Bakra Eid. In addition, the government of J&K also clarified about the same through a press circular released on 16 July 2021.

All these news outlets have published the data on and after 17 July 2021, when the Government of Jammu and Kashmir had already issued a statement on 16 July 2021 that there is “No ban on animal slaughter on Eid-ul-Adha”.

Therefore,  ‘Jammu & Kashmir Government banning animal slaughter on Bakri Id’ was spread by many news agencies, especially those abroad, including The Independent, & Arab News, with the intention to create disharmony in India.