होमFact CheckFact check: Know the truth behind the viral interview of Azam Khan?

Fact check: Know the truth behind the viral interview of Azam Khan? 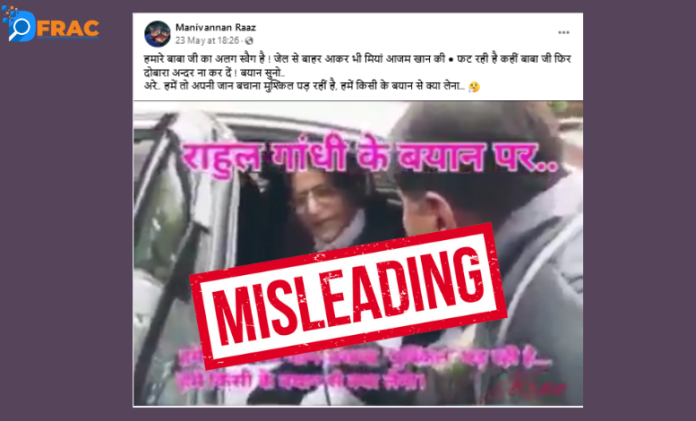 A video of SP (Samajwadi Party) minister Azam Khan is going viral all around the social media sites.

In the video, Azam is seen saying to the interviewer that right, now he is finding it difficult to save his life. What does he have to take from someone else’s statement?

The video is widely shared by many social media with the claim that this interview is from recent days when he got bail from the jail.The caption reads,

“Our Baba Ji has a different swag! Even after coming out of jail, Mian Azam Khan’s is bursting, Baba ji should not put him inside again! Listen to the statement..

Hey.. we are finding it difficult to save our lives, what should we take from someone’s statement?”

We reverse searched the image to know the authenticity of the viral video and found the viral video to be old. The video getting viral is of December 2019. Azam came out of jail on 20th may 2022(i.e recently).

We found the same report was covered by different news sites like Amar Ujala on 15th December 2019.

The video of SP minister Aazm Khan is getting viral with a misleading claim as the video is not from recent times but is old from the year 2019.

Claim Review: Azam is seen saying to the interviewer that right, now he is finding it difficult to save his life.