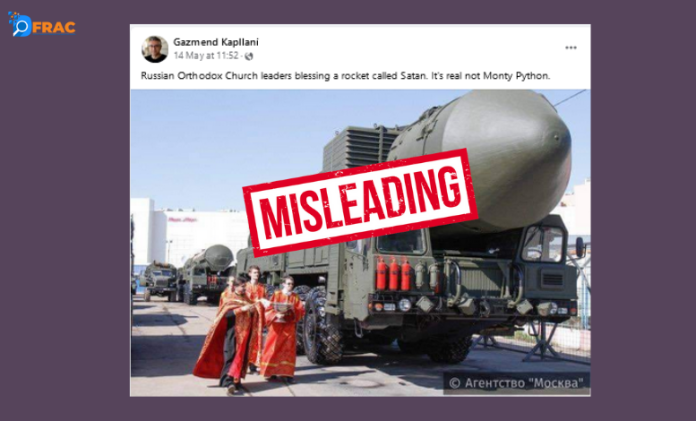 Amid the Russian–Ukraine war many news are spreading around the globe with much speed.

A news image has come forth which is being shared on many social media sites. In the image, there can be seen certain church leaders with a rocket-look a like structure and blessing it. The name of the structure  as written in many captions is “Satan.”

The social media users are sharing the picture with the claim that the Russian orthodox church leaders are blessing the rocket.

We did a reverse search image of the viral image to know the authenticity. We got to know that the picture is not from the recent war times but was first uploaded in the year 2017.

The report on this entire scenario was covered by a news site called, “EUROMADIAN PRESS”

This image along with other images were also uploaded on Moscow City News Agency under the caption, “Ritual of blessing the participants of the Victory Parade and the consecration of launchers on the Khodynka field.”

Also, the so called rocket in the viral image is in actuality a missile.

The image is old and not from the recent war, also in the image that is not a rocket but a missile.