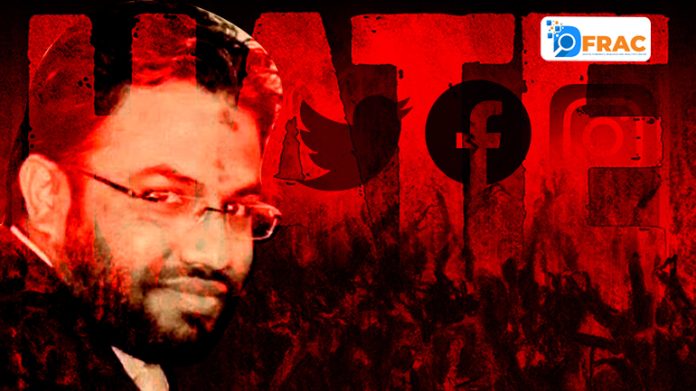 Kakavani aka Ali Sohrab is known for posting hateful and communal content on social media. He describes himself as a scared journalist in his Twitter bio. Significantly, Twitter has already suspended 9 of his accounts one by one for the objectionable post. But, like a phoenix, he resurfaces by creating new accounts filled with even more wicked narratives. Currently, he is operating through his 10th account, Ali Sohrab (10.0) on Twitter. We have already covered his vicious narrative in the following reports:

At present, Ali Sohrab has 18.8K Followers on Twitter. He described himself as a Social media influencer but his handle is filled with posts that provoke communal distress. We have covered his hate agenda thoroughly in our previous reports also. Few examples of his hateful narrative are given below.

Ali Shohrab has 274K followers on Facebook whom he generally feeds with provocative and misguided content. His page was created on 9th October, 2018 and is managed by two location which include Qatar and Saudi Arabia. Although his Twitter account has been suspended nine times, his Facebook account has not been suspended yet.

His profile is filled with post criticizing the constitution of India and hateful posts against other religion. Through his post he tries to convey message that Constitutional secularism is Anti- Muslim. Some of the examples are below:

He posted a video of a man saying that, “it is the weakness of Muslim community that they permission of excavation, if you remove a brick of our gurudwara, we will shake the bricks of your parliament.”

Threatful and misguided content in the name of religion.

He posted a video of hate speech with the caption, “We reject Nizam-e-Mustafa again and yes, we will tolerate as much oppression as we have to bear but we will not let any “fight” on Nizam-E-Kufr: Mahmood Tandvi.”

Derogatory captions on his posts on Hindus

In one such post he posted a video in which a man was asking a religious teacher about eating Non veg. He captioned the video, “It is a sin for Hindus to eat meat, fish, but from Shudra to Brahmins of Bihar eat meat only so that Muslims do not get cheap meat and fish!”

Sharing a screenshot of a post of India Today about Zakir Naik, he mentioned, “Modi government was preparing to ban Dr. Zakir Naik by falsely accusing him…”

In another such post he shared a video of Zakir Naik with the caption, “Modi govt to support atrocities on Muslims in CAA and Kashmir What proposal was kept in front of Zakir Naik, listen from Zakir naik himself.”

He posted a video with the caption, “Hunood can be easily replied that “According to Ramayana when Sita went on exile, she was 18 years old and was in married life since 12 years i.e.e. enjoying married life at age 6” but Democracy/Kufriya Nizam that is it Wants Blasphemy to continue in FOE’s name…”

Fake photos with the claim that they are of Gyanvapi Masjid.”

Ali Sohrab have posted two pictures with the caption, “The survey team was doing survey of the mosque by doing wazu everyday, but the team did not find anything, then on the last day Shivling was seen in the fountain of wazukhana? Well, all these arguments are useless because if the Taguti court wants, it can seal the worship places of mental slaves without survey… You may disagree if you want but when the Taaguti court has ordered to seal the fountain/fountain in Wazukhana as Shivling, if you continue doing such slavery of Taagut, the day is not far when this Taagutti court and Nizam says Shivling to your embarrassment. Will seal it!.”

Below the wordcloud represents words mostly used in the tweets of ali sohrab. They include मुसलमान (Muslim), हुनूद (Hindus), रसूल (Rasool), अल्लाह (Allah), सिस्टम (system), इस्लाम (Islam) and लोकतान्त्रिक (Constitutional). He uses the term Hunood (हुनूद) for people belonging to Hindu community and Libboos of liberals.

Twitter has already suspended Ali Sohrab’s nine accounts but he continues to spread hate from his new Twitter handle. Apart from Twitter, he posts hateful content from his Facebook account as well Instagram account on a large scale. There are many posts criticizing the Constitution of India and concept of Secularism. Most of his posts are communal in nature and have potential to misguide common masses and to incite communal hatred.

He garbles with the truth to create a feeling of relative deprivation among Muslims. This account works on the agenda of communal disharmony and misguide people in the name of religion. People like him are a grave threat to the fundamental concept of “Unity in Diversity” in Indian society.