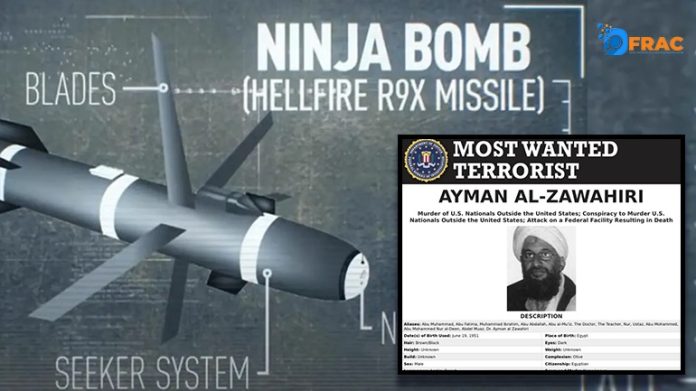 India and half of the world woke up on Tuesday to breaking news coming from the United States that announced the killing of the al Qaeda leader Ayman al-Zawahiri by the US intelligence agency CIA in a special operation inside Kabul.
Although the US administration including President Joe Biden didn’t reveal the weapons used in the attack, the claim that no civilian, including Zawahiri’s family in the house, were harmed during the attack confirmed that the CIA used the dangerous MQ-9 Reaper AS drone equipped with the twice dangerous missile ‘Hellfire R9X’. The ‘go-ahead’ was given by Biden after Zawahiri was spotted in the balcony, and since the photos clearly show no sign of blast but a big hole in the wall further confirms the use of Hellfire missile.
This missile is the most advanced weapon in the world, but the US has never openly accepted possessing it or using the same. The biggest feature of this missile is that there is no gunpowder in it, but its six sharp blades. Zawahiri’s life was taken by the sword-edged blades of the missile that protrude out just before impact and shred the target. These missiles are further equipped with lasers and as soon as they are dropped on the target, it becomes impossible to escape.

The missile is also called ‘Ninja’ or the flying Ginsu’ nicknamed after popular kitchen knives sold on television in the 80s era. Zawahiri is the latest victim of this ninja missile. The most sophisticated weapon of the American military, this missile strikes so accurately that only the target is stacked and no one is harmed nearby. Its extended blades only make it more dangerous and cut through metal. This weapon was developed in the year 2011 during the tenure of former US President Barack Obama. The Obama administration was concerned about several innocent civilians that lost their lives in drone strikes. The missile is said to be developed jointly by the CIA and the Defense Department. Military contractors Lockheed Martin and Northrop Gumman were responsible for its design, development, and manufacturing.

‘Hellfire R9X’ was first used in 2017 by the US in the killing of al-Qaeda terrorist and second in-command Abu al-Khair al-Masri in Syria. These missiles are so fast that buildings, car roofs, and even a human’s skull can be ripped apart in seconds. Zawahiri is now buried in Shirpur, Kabul. US President Biden gave information about this entire operation and said that on Saturday the CIA conducted a special operation and by Sunday the news of his death came.

Used in Syria too

Zawahiri was 71-year-old and took over al-Qaeda reigns after Osama bin Laden was killed by US Navy Seals in Pakistan’s Abbottabad in May 2011. Two Biden administration officials, on condition of anonymity, also confirmed that on August 1, two ‘Hellfire R9X’ missiles were fired at Zawahiri when he entered the balcony of his ‘safe house’. The head of this missile is fitted with an iron weighing 45 kilograms. The six extended blades are then fitted in such a way that the target is shredded instantly. In June 2022, terrorist Abu Hamza al-Yamani was killed by the same missile in Syria.

No clarity on its quantity, usage

There is no information about how many such missiles America has. According to the New York Times, its use was approved twice by the Secret Military Joint Special Operations Command twice in 2019 and 2020. In the year 2019, Wall Street General gave information about the R9X missiles for the first time. This missile was used in attacks in Afghanistan, Yemen, Iraq, Libya, and Somalia at that time. This missile has been used dozens of times to hit a specific target on many occasions.

The Lazy Dogs in Vietnam

A similar innovative weapon was used during the Korean and Vietnam Wars in 1950. It was probably the first time that the idea of weapons without explosives came to the US Army. They were named Lazy Dogs. These bombs were designed in such a way that kinetic energy was used and they were dropped from the aircraft. Their weight was between 560 and 625 pounds. Lazy dogs, however, were later rejected by military commanders, and their development was stopped in 1960.