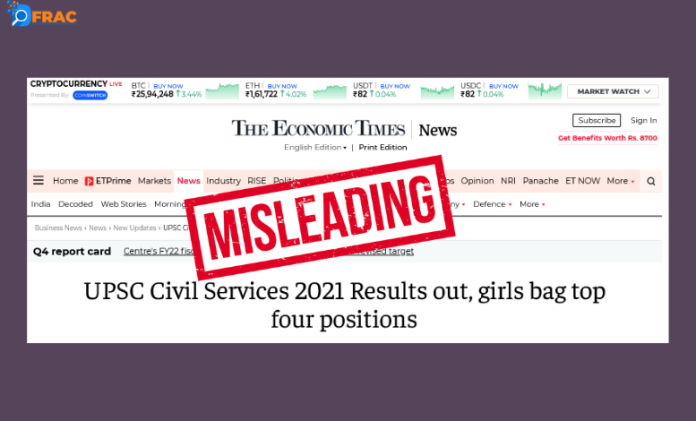 UPSE announced the Civil Service Examination Results on the 30th of May. The news was the highlights and headlines of many news reports.

With this, a claim went viral on social media, which states that girls bagged the top four positions in the UPSE Civil Service Examination.

Much Reputed media houses like The Economic Times and News18 too covered this report whose achieve links are provided.

We searched the Keyframes and found that among the top 4 positions the AIR 4 (All Indian Rank) is eld by a man whose name is Aishwarya Verma, a student from Ujjain. 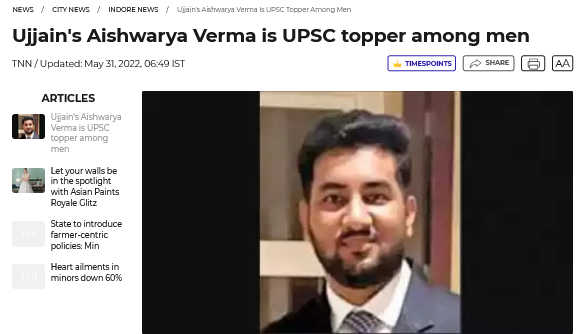 DFRAC found that many news reports were considering Aishwarya Verma a women only by looking at the name and without any thorough investigation.

Claimed by: The Economic Times and News.

When Indians were fighting the British, then RSS workers were giving a salute to the Queen of Britain? Read Fact Check

A picture of RashtriyaSwayamsevakSangh (RSS) workers is going viral on social media. In which...
Uncategorized

A picture is going viral on social media sites, in which RSS Sarsanghchalak Mohan...
Uncategorized

A picture is getting viral on social media sites where some students are seen...
Fact Check

Fact check: Have women got tricked at voting booth during Election 2022?

After BJP’s remarkable win in Assembly Election. Social Media was flooded with opinions and...
Fact Check

Fact Check: Did Mamta Government Waived Off The GST Of The Muslim Traders In West Bengal?

All the religions in the constitution of India have the same place. But, some...
Uncategorized

Fact Check: Did Russia stop the war to evacuate Indian students from Ukraine?

The situation in Ukraine is dire after the Russian attack. Thousands of students from...