Fact Check: Was there a picture of Nehru on the wall during PM Modi and Chancellor Schultz’s meeting? 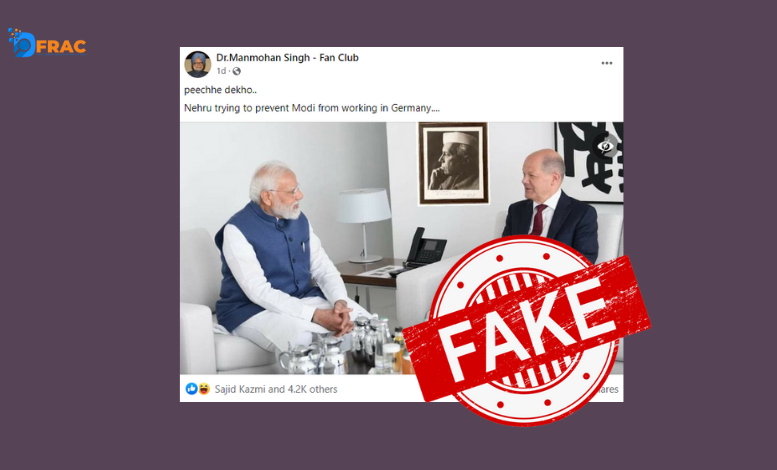 The picture of the meeting between Prime Minister Narendra Modi and German Chancellor Olaf Schultz on May 3, 2022 is going viral on social media sites, in which India’s first Prime Minister Jawaharlal Nehru is seen in the background. Users are sharing the picture with the caption ‘Look back’.

Dr Manmohan Singh – A Facebook user named Fan Club PM Modi with the caption ‘peechhe dekho…Nehru trying to prevent Modi from working in Germany.” And shared a photo of Chancellor Schultz’s meeting, in which Nehru is seen in the background.”

Himachal Pradesh Guide Forum wrote ‘Nowadays in our country only the devotees of Modi ji speak about Nehru ji, but why are the pictures of Nehru installed abroad?’ while writing the same picture on 04 May 2022 at around 04 pm has posted. (Translates Hindi)

On searching the internet, we found that many pictures of PM Modi and Chancellor Schultz’s meeting in Germany’s capital Berlin have been shared from the verified account of PM Narendra Modi on 03 May 2022 and none of these pictures are such that whose background I have Nehru’s photo.

On the other hand, the official Twitter handle of PMO India has shared a picture in English by writing ‘Increasing Indo-German cooperation, meeting between Prime Minister Narendra Modi and German Chancellor Olaf Schultz in Berlin.

It should be noted that this is the same picture in which the picture of Nehru is being shown on the wall in a misleading way.

This fact check proves that the claims being made by social media users are false and misleading.

Claim Review- Nehru’s photo in the background of the meeting of PM Modi and Chancellor Olaf Schultz in Berlin.

Jharkhand is in the headlines these days. The reason...