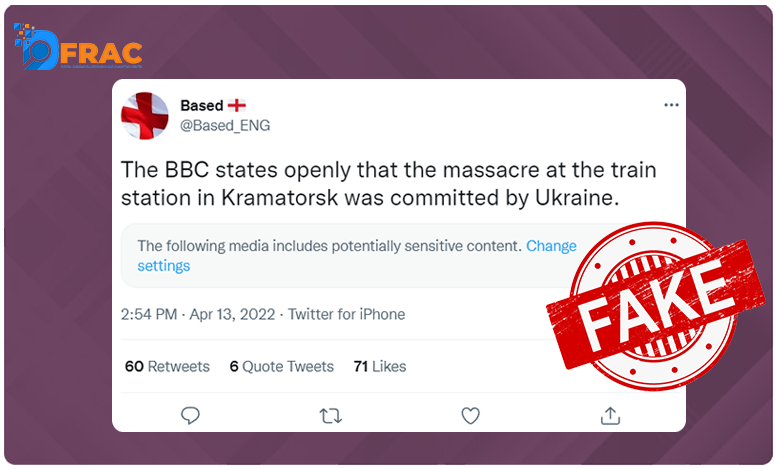 The war in Ukraine continues as Russia likely seem to have no plan to cease the attacks. Many people have already died during the war, and few have fled away. Ukraine is also facing an economic crisis and a shortage of weapons.

Meanwhile, a video supposedly of BBC is going viral over a missile attack on Kramatorsk Railway Station in Ukraine. As per the users BBC has claimed that a missile attack was done by Ukraine itself on the station.

The BBC states openly that the massacre at the train station in Kramatorsk was committed by Ukraine. pic.twitter.com/hZzUmGGyT4

After cross-checking, we got a tweet from British Broadcasting Corporation wherein they have dined the claims of stating that Ukraine was responsible for the missile attack on Kramatorsk Railway Station. 52 people were killed in the attack and mostly the crowd was filled with women and children

We are aware of a fake video with BBC News branding suggesting Ukraine was responsible for last week’s missile attack on Kramatorsk train station. The BBC is taking action to have the video removed. We urge people not to share it and to check stories on the BBC News website.

After checking the feeds of BBC on the official Twitter account, we found that no such tweets were made by BBC.

Conclusion: Therefore, the claim is misleading

Previous articleFact check: Did the old image of protest in Malaysia against the persecution of Indian Muslims go viral?
Next articleDFRAC Exclusive: Fake Pakistani Accounts and their Pro China Narrative