Fact check: Have women got tricked at voting booth during Election 2022? 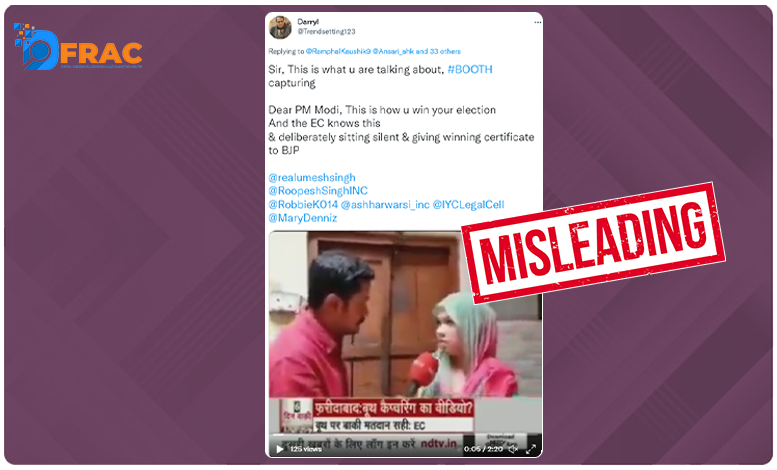 After BJP’s remarkable win in Assembly Election. Social Media was flooded with opinions and posts regarding the result. Meanwhile a video is getting viral where people are suspecting cheating at Election booth.

Santosh Diwate, posted a video of NDTV news coverage regarding election. Time duration of the video was 45 minutes and in the video reporter was taking the byte of 3 women who got tricked while voting. The women claimed that the polling agent who were sitting at the booth pressed ‘kamal’ (BJP’s Symbol) in the electoral machine. In short, the women wanted to press ‘Hathi’ but workers at the booth pressed ‘Kamal’ in place of it and try to influence them as if it was mistakenly done. The user criticized the Modi govt and questioned its win in the election 2022.

Darryl also accused the BJP of winning election unfairly. He posted the video on 12 March, 2022.

Sir, This is what u are talking about, #BOOTH capturing

Dear PM Modi, This is how u win your election
And the EC knows this
& deliberately sitting silent & giving winning certificate to BJP@realumeshsingh@RoopeshSinghINC@RobbieK014 @ashharwarsi_inc @IYCLegalCell @MaryDenniz pic.twitter.com/WoRYNrASd1

After cross-checking we got the whole video of NDTV and initially found out that the news is of Election 2019. As per the original news, the fraud at voting booth took place in Faridabad. NDTV itself posted the video on its official YouTube page.

Hindustan Times also covered the news of poll agent being arrested for influencing the voters in the Lok Sabha election 2019 at Faridabad.

Thus the viral video was taken from NDTV’s news coverage of the Lok Sabha election 2019.

Conclusion: Hence proving that the claim is misleading

Claim review: women got tricked at voting booth during Election 2022