होमFact CheckFact Check: Did Vijay Mallya write a cheque to BJP before leaving...

Fact Check: Did Vijay Mallya write a cheque to BJP before leaving India? 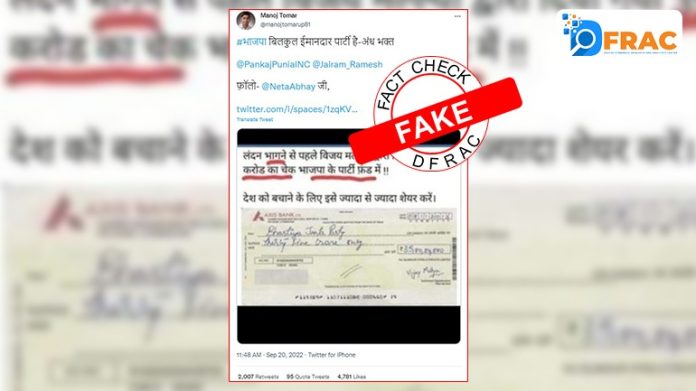 A picture of a cheque is doing rounds on the internet. Sharing the picture, social media users are claiming that, it is the picture of the cheque that Vijay Mallya signed before he flew away from the country. Meanwhile, Twitter user Manoj Tomar shared the picture with the caption, “#BJP absolute honest party – blind devotee. @PankajPuniaINC, @Jairam_Ramesh.” {English Translation}

Similarly, many other users have shared this picture with similar claims.

In the cheque, the date is 8th November 2016 but Mallya fled on March 2, 2016. Therefore, the date on the cheque is of the time after Mallya left the country.

Apart from this, there are many other errors in the Picture:

Digging more into the matter, the DFRAC team came to know this picture got viral in the past also.

From this Fact Check, it is clear that the viral image of the cheque is morphed. Hence, the claim of social media users is misleading.