होमFact CheckFact Check: Is the Muslim population surpluses the Hindu population in Nanital?

Fact Check: Is the Muslim population surpluses the Hindu population in Nanital? 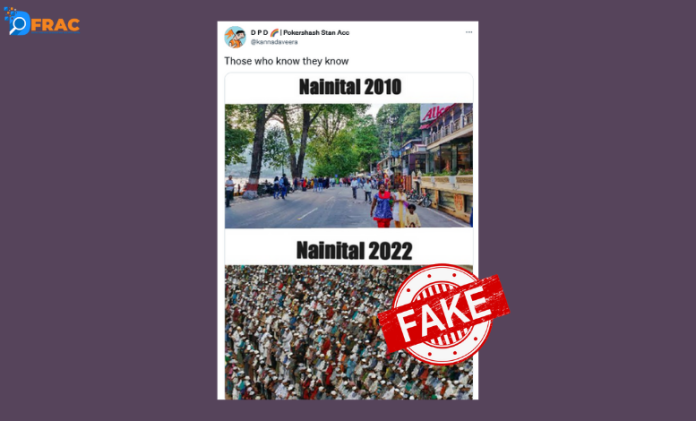 A collage of pictures is getting viral on social media where there is shown a comparison between the two pictures in order to showcase the surplus population of Muslims over Hindus in Nanital.

In the first picture, there are very few people on the road with the caption “Nanital 2010.”(Representing Hindu Population)

Whereas, in the second picture there are a lot of people offering namaz. The caption written over that picture is “Nanital 2022.” (Representing Muslim Population)

Many users are sharing the image under the caption, “Those who know they know.”

We reverse searched the image and found both images on different online sites.

The first image is on a tourist site named indianholiday.com showcasing the top 10 hotels in Nnital near MallRoad for memorable stay.

The second picture was found on alzeera.com a news site. The picture was under the caption, “Millions Attend World’s Second Largest Muslim gathering.”

The picture is also not from India but from Bangladesh.

The collage of the picture is not the reality and is taken from two different scenarios.