होमFact CheckFact Check: know the truth behind the viral picture of a new...

Fact Check: know the truth behind the viral picture of a new Australian PM wearing a Vishwa Hindu Parishad scarf. 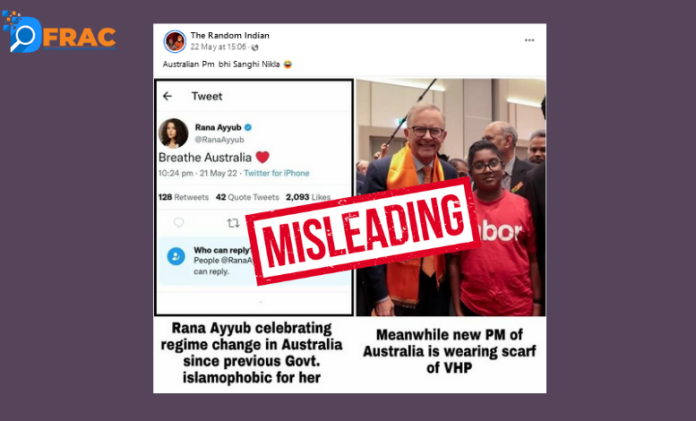 A collage of two pictures is getting viral on social media. In the first image, a tweet of journalist Ayub Rana is shown which states, “Breath Australia.” With a red heart. The screenshot was followed by a caption stating, “Rana Ayyub celebrating regime change in Australia since previous Govt. islamophobic for her”.

In the second image, Albanese is seen wearing a saffron-colored scarf with tha caption that reads, “Meanwhile new PM of Australia is wearing scarf of VHP”.

The same viral picture along with many other pictures from that day  are shared by him on his official Twitter handle with the caption that writes, “with the caption, “A warm reception in Parramatta tonight with leaders from the Hindu faith and subcontinental communities.”

A warm reception in Parramatta tonight with leaders from the Hindu faith and subcontinental communities. pic.twitter.com/6m79gzXhDz

The Hindu Council of Australia also tweeted about the same event from its official account. 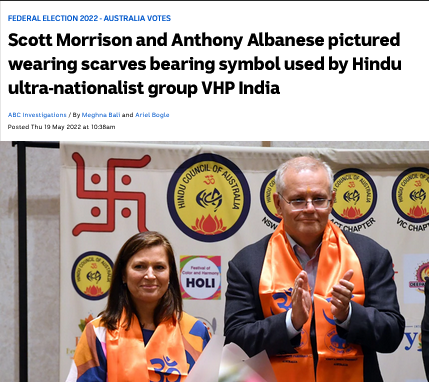 The video is getting viral with the misleading claim.